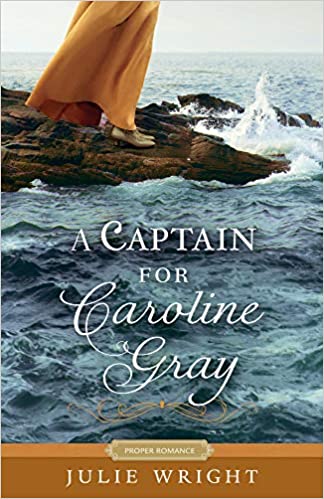 Caroline Gray’s third season in London society ends as badly as her first two—no marriage proposal, no suitor, not even a glimmer of an interested prospect. She suspects it’s because she is far too quick to speak her mind to men who are put off by her forthright opinions, her eager intellect backed by a formal education, and her unconventional ideas about the future. She is far more daring than demure to suit the taste of her class. Besides, Caroline thinks there will always be next season to find a husband.

However, her family’s dwindling income leaves Caroline with only one choice to secure her future: a one-way ticket to sail with the Fishing Fleet to India, where the son of a family friend waits. If the match doesn’t work, Caroline cannot return home.

Captain Thomas Scott loves the thrill of the open sea, and as commander of one of the ships of the “Fishing Fleet,” he ferries scores of young English girls to the shores of India to find husbands. The voyages pay well, but he struggles to understand why families would allow young women to be matched with total strangers so far away.

The trips have always been routine and uneventful—until this trip’s first night’s dinner with one Miss Caroline Gray. She engages in a lively political conversation, presenting opposing viewpoints to the conventionally opinionated gentlemen at her table. Captain Scott is secretly amused and delighted at her boldness, not to mention quite drawn to her beauty.

The rest of the passengers are shocked by her behavior and Caroline finds herself an outcast, suffering harsh judgments from the other passengers. However, she finds an unlikely ally in Captain Scott which quickly draws them closer.

Both know an arranged marriage awaits Caroline at the end of their voyage, yet the attraction between them is undeniable. Caroline will have to decide if she will honor her mother’s wishes and marry a man in India whom she has never met—thus securing a future for her and her mother—or be brave enough to throw convention to the wind and commit to love a sea captain. He may be enchanted by her bold and unconventional ways, but will his love and admiration last?

I’ve been on a bit of a Naval Historical novel kick lately. After reading Georgana’s Secret by Arlem Hawks, A Captain for Caroline was perfect. They have similar themes, characters and ship based settings… historical fiction at its finest.

Caroline is off to secure her future. Her choices are being narrowed at the hand of her family and of an Englishman living in India. She’s a bluestocking–outspoken, intelligent. Being fluent in political discussion is all but forbidden for ladies. She’s not afraid to speak her mind. She believes this practice in London’s society circles fails to make her a match and leaves her without girls to call friends. Trying to fit in with the crowd, Caroline loses her feisty spirit. Wright teaches an important message about being true to who you are.

Thomas is a sea captain, in charge of helping many of the ladies of England seeking a husband to India. He’s stubborn and hard headed at times. As a reader, you’ll find yourself wanting to yell at him for his assumptions.

With stops and starts in their relationship, Wright builds a historical romance which teaches about the dangers of gossip, the need to be true to yourself and the value of sincere apologies. The villains of the story could have been a little more well fleshed out, but that’s about all I missed in this book. I so loved being swept away at sea once again. The Proper Romance series by Shadow Mountain continues to put out wonderful books!

Julie Wright wrote her first book when she was fifteen. She’s written over twenty novels since then. She is a Whitney Awards winner for best romance with her books Cross My Heart and Lies Jane Austen Told Me, and she is a Crown Heart recipient for the novel The Fortune Café.

She has one husband, three kids, one dog, and a varying amount of fish, frogs, and salamanders (depending on attrition).

She loves writing, reading, hiking, playing with her kids, and watching her husband make dinner.