I am happy to be hosting a spot on the MISMATCHED IN MAYHEM by L.E. Rico Blog Tour hosted by Rockstar Book Tours! Check out my post and make sure to enter the giveaway! 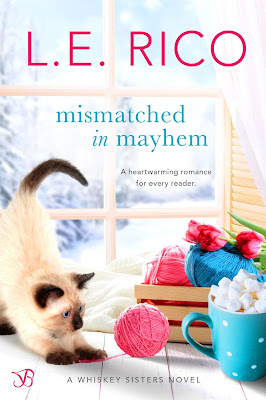 Welcome to Mayhem, Minnesota, with its sweater-wearing cats and ultra-competitive trivia nights. Where love really does conquer all…if you’ll let it.

Walker O’Halloran is finally ready to shed her “wild child” persona. Bartending at her family’s pub, babysitting her adorable niece and nephews, and getting her degree during the day. What she doesn’t do is date–or even think about dating. Ever. Until he walks into her bar, looking like a former Mr. Quarterback of the Football Team and Student Council President all rolled into one. No, thank you.

Mason Stevens has a secret—and it prevents him from knowing if someone is truly interested in him, or just what he can do for them. Until he meets Walker. She’s the first person in ages who doesn’t recognize him, and her grouchy attitude feels like the greatest challenge of his life. And he’s ready for it.

But the more time they spend together, the more he’s desperate to come clean—it’s just never the right time. Until the paparazzi do it for him…

Excerpt:
When he glances back down again, he finds me staring. At him.
“Come here,” he says quietly, opening his arms to me.
For a second, I fell bashful, and it’s such a foreign feeling for me. I loathe the feeling of vulnerability. But it’s not just a feeling. It’s what I am. And somehow, that’s never a problem when I’m with him. 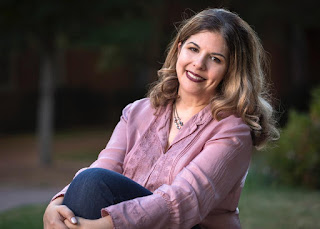 Award-Winning author Lauren Rico also happens to be  one of the top classical music broadcasters in the country. Her voice is heard nationally on SiriusXM’s Symphony Hall channel, as well as on radio stations in New York City, Charlotte, and Tampa. She’s even been known to accompany travelers as they fly the skies over Thailand, Oman, and China as part of the in-flight entertainment on several airlines. Her love and passion for classical music have allowed her to breathe new life into the stories of the great composers.

And now Lauren is telling some stories of her own…

From there, Lauren partnered with Entangled Publishing, LLC, to create the first in her Symphony Hall series of romance novels, Solo (Entangled Publishing 2017). Her most recent release, Mistletoe in Mayhem, is the third in the five-book Whiskey Sisters series (Entangled 2018). Upcoming projects include two more Whiskey Sisters romances, a follow-up to Solo and a super-secret, as-of-yet-unnamed thriller.

Lauren hopes to bring classical music to a new audience by showcasing it in twisty, steamy stories that grab the reader and keep them turning pages — and YouTubing the music — into the wee hours.

When she’s not on talking on the radio or typing on her laptop, Lauren enjoys time with her husband and spectacularly spoiled mini-schnauzer.

One Response to “Mismatched in Mayhem Blog Tour and Giveaway”