For as long as Jarem can remember, the war between the Nephites and Lamanites has raged on. But for the young Nephite, there is security in the knowledge that the ruthless Lamanite warriors would never dare cross the border into his village—until the unthinkable happens. A Lamanite raiding party defies boundaries, destroying the village and killing Jarem’s family. Enslaved to his enemies, Jarem must rely on his faith in God as he endures unimaginable hardships at the hands of the Lamanites—including being cruelly separated from the woman he loves.

But even amid trials, there is goodness to be found. When Chemish, Master Healer of the Lamanites, takes ownership of Jarem, the young man discovers unexpected kindness. Jarem becomes the healer’s apprentice, and soon Chemish finds his soul stirred by the Christian faith of his student. But even as the bond between the two unlikely friends grows, the hatred of the Lamanites spreads. It is no longer enough for them to own the Nephites—they want to exterminate every one of them, and even personal slaves are no longer safe. Now, Jarem’s only hope of survival is a dangerous escape that will take him through the heart of Lamanite land . . . 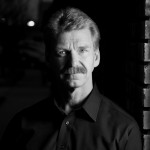 I was born November 20, 1959 in Bakersfield, California. I lived there for only three years before moving to Santa Barbara, California. I attended Foothill Elementary, La Colina Jr High, and San Marcos High Schools. My interests at that time were art, music, writing, volleyball, the beach, science, and girls (not necessarily in that order). I graduated in 1977 and then served an LDS mission in Wisconsin. After that, I spent seven months at BYU on a cinematography scholarship, but that didn’t pan out (pun intended). I returned to Santa Barbara and worked about two years at a research center before I realized an education was the only way to avoid a dead-end career. Over the next four years, I attended Santa Barbara City College, UC Santa Barbara, and BYU majoring in Biological Sciences.

I then attended the University of Utah College of Pharmacy, graduating in 1990. I practiced in Northern California for six months before moving to Logan, Utah in 1991. I am currently the Director of Pharmacy for the Cache Valley Community Health Center in Logan.

Throughout my life, I have loved writing. I began my literary career writing and illustrating short stories (none of which were ever published). My first success came with cartoons published in Skin Diver Magazine, the Oceanographic Letter, and several in the New Era. It wasn’t until I had graduated from college that I began to write seriously. Even then, it took nearly ten years before I had any success getting published. I’ve published in the New Era, Destiny Magazine, and Pharmacy Times.

My preferred reading genre is science-based thrillers, particularly the works of Robin Cook, Tom Clancy, and Michael Crichton. But I enjoy reading just about anything I get my hands on, fiction and nonfiction, including many LDS authors.