Fire and Ice is thrilled to kick off the official Rock Star blog tour for Bluescreen by Dan Wells. Check out our exclusive interview with the author and be sure to enter the giveaway! 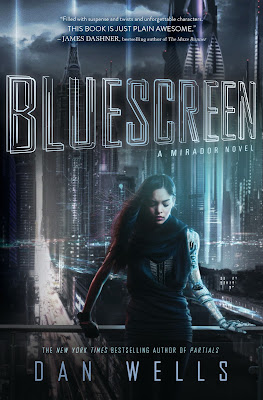 Los Angeles in 2050 is a city of open doors, as long as you have the right connections. That connection is a djinni—a smart device implanted right in a person’s head. In a world where virtually everyone is online twenty-four hours a day, this connection is like oxygen—and a world like that presents plenty of opportunities for someone who knows how to manipulate it.

Marisa Carneseca is one of those people. She might spend her days in Mirador, the small, vibrant LA neighborhood where her family owns a restaurant, but she lives on the net—going to school, playing games, hanging out, or doing things of more questionable legality with her friends Sahara and Anja. And it’s Anja who first gets her hands on Bluescreen—a virtual drug that plugs right into a person’s djinni and delivers a massive, non-chemical, completely safe high. But in this city, when something sounds too good to be true, it usually is, and Mari and her friends soon find themselves in the middle of a conspiracy that is much bigger than they ever suspected.

Dan Wells, author of the New York Times bestselling Partials Sequence, returns with a stunning new vision of the near future—a breathless cyber-thriller where privacy is the world’s most rare resource and nothing, not even the thoughts in our heads, is safe.

Tell us what events or conditions in today’s world lead to your future world?

Predicting the future is one of the coolest, and hardest, parts about writing science fiction. Writing a book set in 2050 was especially risky, because most of us are going to still be around in 2050, so we’ll know exactly how wrong I got it 🙂

The first thing I looked at was the technology: what are the first and most plausible directions our technology is going to take? Most major car manufacturers, for example, claim that we’ll have fully self-driving cars on the mass market by 2020, so I figured that by 2050 they’ll be everywhere–in fact, by 2050, my teen characters have never even seen a car that DOESN’T drive itself. I love the idea that one generation’s wondrous new innovation will eventually become a future generation’s old boring default. When I was kid phones still had rotary dials on them, and I’ve watched the development of push buttons, and then cordless phones, and then cell phones, and then smartphones, and now smartphones are so ubiquitous everyone seems to have one. I saw a homeless guy with a smartphone the other day.

Smartphones were another technology I wanted to advance into the future, so I thought long and hard about what the next step would be. Some kind of wearable, like a smart watch or a Google Glass? That’s the right direction, but it’s not going far enough–we already have those, so 35 years in the future we need to have something one or two generations more advanced. The answer I settled on is called a djinni–a wearable/supercomputer/telephone/gaming console/GPS/everything else that’s so integrated into our lives that we actually have them installed in our brains, with displays that just appear in our vision because they’re connected directly to our optic nerves. Want to call your best friend? Just blink, and you’re instantly connected. Want to find a good restaurant? Your brain’s already connected to the Internet, so just do a quick search, and then follow the arrows that appear in the air to lead you right to it. It sounds invasive to us, and maybe a little creepy, but in the future everyone has them, and can’t imagine life without them.

I played with a lot of other fun technologies, like smart houses and personal drones that do everything for you, but you can read more about those in the book. Right now I want to talk about the politics of my future world, which I promise won’t be boring because I can sum it up in one sentence: corporations run everything. We already kind of live in a world like this: rich businesses, and rich business owners, can get away with all kinds of crazy stuff just by donating to senator’s campaigns: this is actually a fun game that you can play right now. Go look up a politician–the bigger the better–and look for some kind of firm stance that he or she has taken on a major issue. Then go look up their campaign donation records, and nine times out of ten you’ll find a huge chunk of money from a business or lobbyist who’s directly helped by whatever firm stance that politician just took. It’s uncanny. All I did was extrapolate that behavior to it’s worst extreme, imagining a world where governments are essentially just figureheads, with private corporations calling all the shots, and making and enforcing their own laws.

But that’s the depressing stuff, so let’s talk about one more fun bit of futurism before we move on to the next question. You know why I wrote this book? The original seed that made we want to tell a story about a tech-obsessed future? I read an article a couple of years ago that said professional video game players were now eligible for athletic visas. Gamers are considered legally equal to swimmers and sprinters and basketball players, and our concept of “sports” and “athletes” is becoming digital. I love this, and I’m a gamer myself, so I sat down then and there and wrote a quick outline of a story about a group of teenage girls who work as professional League of Legends players. That outline eventually morphed into the Mirador series, of which Bluescreen is the first book.

I’m a huge fan of privacy, not because I go around doing bad things, or even super secret things, but because I thing privacy is important for its own sake. You should be able to do whatever you want in your own home, with your own things, and as long as you’re not hurting someone nobody has any reason to get up in your business about it. The problem with privacy is that what if you ARE hurting someone? How are we supposed to stop you unless we know what you’re doing? It’s a complicated issue that no society has ever truly solved. My Partials books were, in many ways, directly about the struggle between freedom and security, and in that same sense the Mirador books are about the struggle between privacy and connection. We want to stay private, but we also want to post thirty-seven pictures of this awesome party on Instagram, and those pictures will reveal where we are, who we’re with, what we’re doing, what clothes and food and other products we’re buying, and more. The sheer connected-ness of the Internet makes privacy almost laughable–we seem to have the idea that anything you put on the Internet is fair game for anyone smart enough to find it, which kind of makes sense unless you compare it to literally any other situation in the world. If I leave my window open, it’s still illegal for someone to crawl through it and take all my stuff, but if I don’t set a Facebook post to private, literally anyone is allowed to comb through it for information about me. The company that builds my car isn’t allowed to follow me around to see where I go in it, but the company that builds my email is allowed to to read through it at will.

Perhaps pessimistically, the characters in Bluescreen don’t really think about privacy much because they live in a world where it’s almost impossible. There are cameras everywhere, and computers in your head, and location sensors in every store and building, and you can’t walk down the street without every passing restaurant detecting you, checking your credit card history, and offering you a custom coupon for your favorite appetizer. Worse yet, your presence near that store has now been logged with your credit card company, and with the restaurant’s telecom company, and with yours, and now a whole horde of giant corporations pretty much know where you are and what you’re doing all day, every day, everywhere. One of the characters, named Sahara, straight up lives her life in a 24/7 video feed, like a YouTube vlog that never ends. Of course, if you’re going to commit a crime, you need to find some way to achieve real privacy, so our characters have to get pretty creative….

Where do you predict young adult society will be in 20, 100 years?

I see two trends in our society that might inform this. First, the period we consider “adolescence” is expanding steadily–you used to have this kind of classic, “Leave it to Beaver” concept of adolescence, where you became a teenager at 14 or 15, acted mildly crazy for a few years, and then buckled down and got a job and a family around 20 or 21. Today adolescence seems to start as early as 10 or 11, and can last into your 30s. On the other hand, modern young adults are gaining not just more autonomy but more opportunities for authority–it’s easier to avoid responsibility than it ever has been before, but it’s also easier now to take on responsibility voluntarily. As our technology continues to improve, and as our lives become increasingly digital, young adults will be able to do more and accomplish more because the standard barriers that prevent them will disappear. Want to go to a movie in Tokyo? Just strap on your VR headset and your there. Want to make your own movie or video game? My 12-year-old nephew already makes those in his house. If, on the other hand, you want to lay around watching movies all day and accomplishing nothing, you can do that to. Young adults will have just as many opportunities to waste their lives as they’ll have to make them amazing, and the cream will rise to the top.

What are your favorite dystopian writers and titles?

My favorite dystopian story is actually a novella by James Clavell, called The Children’s Story, about a classroom full of little kids. Something has happened, though it’s never made clear what it is, and their old teacher is replaced by a new one who teaches them, simply and logically, that the Pledge of Allegiance is meaningless. It’s a short and harrowing story about how easy it is to manipulate our thoughts and loyalties if we don’t take the time to really understand the things we claim to believe in.

Most important moral or message you’ve learned as an author?

The funny thing about being an author is that I’m my own boss, which means that if I work I get paid, and if I don’t I know exactly why I suddenly can’t afford to eat anymore. No one is knocking down my door offering me jobs and contracts, because there are plenty of other authors out there who are eager to get them. My job, and the most valuable skill I have as an artist, is waking up every morning and putting in the effort. No one else is going to do it for me.

Dan Wells is a thriller and science fiction writer. Born in Utah, he spent his early years reading and writing. He is he author of the Partials series (Partials, Isolation, Fragments, and Ruins), the John Cleaver series (I Am Not a Serial Killer, Mr. Monster, and I Don’t Want To Kill You), and a few others (The Hollow City, A Night of Blacker Darkness, etc). He was a Campbell nomine for best new writer, and has won a Hugo award for his work on the podcast Writing Excuses; the podcast is also a multiple winner of the Parsec Award.

3 winners will receive a finished copy of BLUESCREEN, US Only.