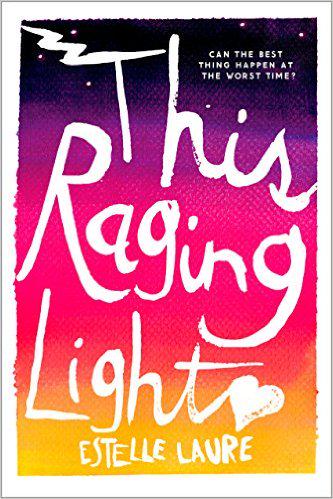 by HMH Books for Young Readers

“A funny, poetic, big-hearted reminder that life can—and will—take us all by surprise.” —Jennifer E. Smith, The Statistical Probability of Love at First Sight

Can the best thing happen at the worst time?

Her dad went crazy. Her mom left town. She has bills to pay and a little sister to look after. Now is not the time for level-headed seventeen-year-old Lucille to fall in love. But love—messy, inconvenient love—is what she’s about to experience when she falls for Digby Jones, her best friend’s brother. With blazing longing that builds to a fever pitch, Estelle Laure’s soulful debut will keep readers hooked and hoping until the very last page.

Shine on, you crazy overexposed growing-up-too-fast-diamond or Five Things I Wish Someone Had Told Me
There was a moment when I realized my parents weren’t all-powerful, that they had possession of more days and months on earth and thereby knew more about the world than I did, but it became clear to me that they were basically winging it, doing their best to figure it out. They too were trying to find their way around a world filled with unknowables and obstacles, to understand their faith, to navigate the weaker parts of themselves. That’s the moment I wanted to write about in This Raging Light. Lucille’s experience is not my own, but she is standing on that precipice of understanding about adults and letting go of childhood.

I don’t feel like I had much of a childhood. I’m okay with that because I don’t think I liked being a kid all that much. I was exposed to a lot, if not by my parents, by circumstances (moving a lot/always being a minority/experiencing poverty and cruelty), by the political climate (Cold War/constant threat of nuclear attack), by my own powers of observation, my own curiosity and my parents’ divorce early on.
In spite of my worldliness and all my experience, I wish I had been slower with things, though. I wish when it had come time to make certain choices, that I had been gentler with myself. Here are a few things I wish someone had told me.
1. Wait to have sex. I was young, my boyfriend was nineteen and he broke my heart and made it impossible for me to trust anyone for a long time. I wish I had been stronger, more self-possessed. He told me he couldn’t be with me if I didn’t do it, and I was so afraid of being dumped and alone that I forced myself into it before I was ready. I didn’t want to be a tease when all my friends were doing it and it seemed like the natural order of things. I wish I had waited. I wish someone had told me I was worth waiting for.

2. Never get into a car with a drunk driver. This seems like an obvious one, right? You hear it all the time. But I did. I wish so much that I had had someone I could trust to call and take me home no matter where I was, but I didn’t. I lost a few friends in drunken car accidents and I am so grateful my life didn’t end that way. Now I tell my kids (who are too young to be anywhere by themselves) to call me, call my friends, bother all of us when the time comes. Never ever ever play with your life like that. It’s not worth it. Ever.

3. Don’t be careless with anyone’s heart. There’s this thing I remember. Once I had my heart broken I wasn’t going to let anyone in to have it done to me. I would strike first. So I did. I became a person who was walled up. Or at least I thought I was. Now I see the damage I did to others and myself, mostly to myself because I was actually so sensitive and was acting from damage instead of love.

Even if you’ve seen a lot, even if you understand that people don’t take each other seriously and use each other sometimes, always take responsibility for how you yourself are treating someone. Hold yourself to a higher standard. Really. That doesn’t mean making an idiot of yourself, only being conscious of your actions and making the kindest choice (which can mean breaking up with someone or having an unpleasant conversation sometimes).

4. Don’t let bit*%*es control you. Because my home life was shaky, I turned to my friends for shelter. That was fine. In the end, I’m still friends with most of those people. But in high school there were some funky dynamics at play. Not all that different from the relationship I had with my first boyfriend, I found myself dependent on my friends for rides, for sleepovers, for school lunches sometimes. The result was that I was totally disempowered and easily controlled, that I dimmed myself down so as not to be a threat, and allowed for some things I wish I could take back or undo, because I wasn’t strong enough to stand up for myself, and sometimes for others. I wish someone had reminded me that I would eventually have to go into the world and live my own life and it’s never worth it to hand your fate over to anyone else.

5. Remember what’s good. There were times when the world seemed black. People flew off roads, planes crashed, people cheated and lied and were cruel because they could be, and the world at large…forget it. I wish I had taken more of a stand for the light back then, that I had decided as I have now, that no matter what darkness there is in the world, no matter how hopeless everything looks, I am an agent for the light.

That doesn’t mean I’m in denial about the world, that I won’t hurt people or that I won’t mess up, that I won’t have to deal with shame or difficulty. It just means that how I define my standards and my behavior on a moral level, internally, between me and me, is important. I will listen to music and read books and educate myself. I will care for the people in my life to the best of my abilities and do random nice things for them. I’ll do what I can all the time to bring brightness and truth into a foggy, messed up world.

I wish I had done that sooner. I wish I had been more helpful, more aware, instead of delving into darkness and allowing myself to be in ways that were false and disingenuous.

Remember, you define what’s good and right for yourself. If you develop a good relationship with your intuition, which most streetwise kids have in spades, you will always know when you aren’t being true to yourself. Remember when the world sullies you, when you behave as less than your best self, when things are hard and everything is a mess and you screwed up again, that you are made of light, that you are good, and that you have the power, in moments if not all the time, to shine out into the world and make it better. 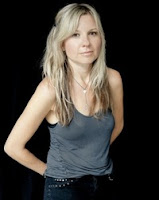 Estelle Laure is a Vonnegut worshipper who believes in love and magic and the power of facing hard truths. She has a BA in Theater Arts from New Mexico State University and an MFA in Writing for Children and Young Adults from Vermont College of Fine Arts, and thinks everyone should have to wait tables or work in a kitchen at least once in their lives. She lives in Taos, New Mexico with her children.

3 winners will receive a hardcover of THIS RAGING LIGHT and a bottle of Essie Nail Polish that matched the book cover. US Only.
a Rafflecopter giveaway

One Response to “This Raging Light Blog Tour, Guest Post and Giveaway”