Fire and Ice is today’s stop on the tour for While You Were Gone hosted by Rockstar Book Tours. We have the author Amy K. Nichols here to answer our questions about the world the book is created in, the music, and the characters behind part II in the Duplexity series. Be sure to stop by all the sites listed on the schedule to learn more! 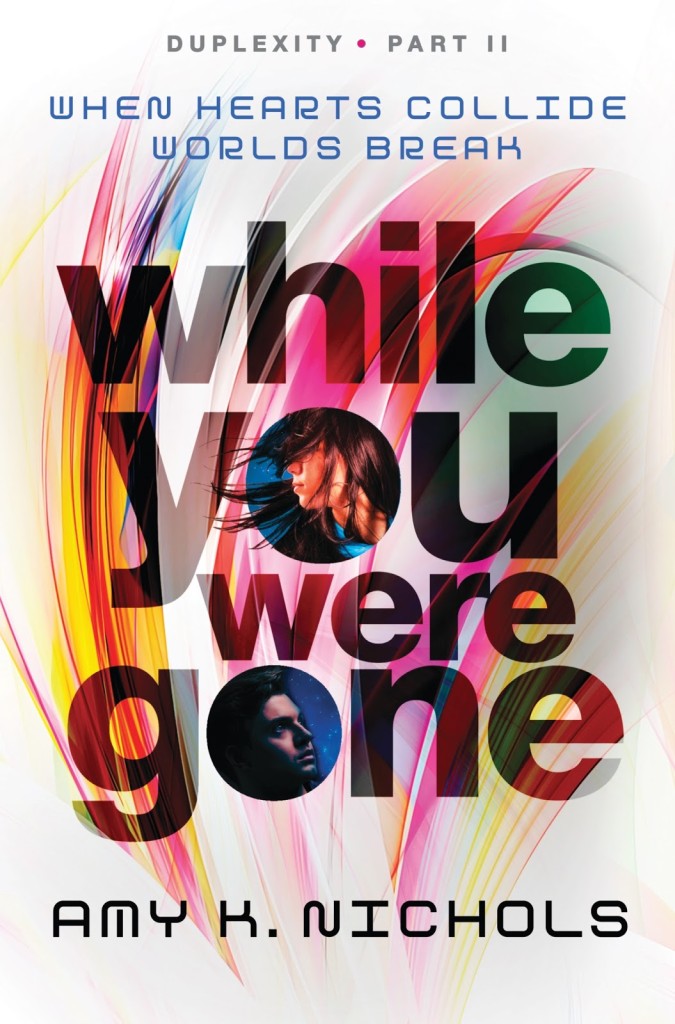 WHILE YOU WERE GONE
by Amy K. Nichols
Published August 4, 2015
by Knopf Books for Young Readers
304 pages

Eevee is a promising young artist and the governor’s daughter in a city where censorship is everywhere and security is everything. When a fire devastates her exhibition—years in the making—her dreams of attending an elite art institute are dashed. She’s struggling to find inspiration when she meets Danny, a boy from a different world. Literally.

Raised in a foster home, Danny has led a life full of hurt and hardship until a glitch in the universe changes everything. Suddenly Danny is living in a home he’s never seen, with parents who miraculously survived the car crash that should have killed them. It’s like he’s a new Danny. But this alternate self has secrets—ties to an underground anarchist group that have already landed him in hot water. When he starts to develop feelings for Eevee, he’s even more disturbed to learn that he might have started the fire that ruined her work.

As Danny sifts through clues from his past and Eevee attempts to piece together her future, they uncover a secret that’s bigger than both of them. . . . And together, they must correct the breach between the worlds before it’s too late.

1) While You Were Gone is set in a society with censorship and security, do you see our society moving in this direction. If so, how?

So, the strange thing is I wrote Now That You’re as a standalone novel several years ago, around 2006, and included the idea of an alternate Phoenix that operates as a surveillance state. In 2011 the book sold as a duology, with a second book set in that alternate world. In late 2013 I actually started writing that second book. I remember the day the Guardian published Edward Snowden’s revelations about government snooping, because it stopped me cold. Suddenly the fiction I was writing didn’t seem so fictionalized. Of course the idea of Big Brother has been around both in stories and in the real world for a long time, but While You Were Gone was the first time I’d tackled the subject in my own work. And here it was playing out in real time on the evening news. It really made me stop and think. How far did I want to push the Big Brother aspect of the society in the book? I knew I didn’t want to write a fully dystopian story (a la Hunger Games) , but I also felt I needed to adequately explore the implications of living in a world where everything you say, do, and even think can land you in trouble. In the end, I decided to take what we have in the real world and amp it up using both existing and emerging technologies as well as actual scientific theories. All that to say, it’s hard not to see our society as one moving in the direction of heightened censorship and surveillance. The question is, how far will it go?

2) Danny and Eevee are anomalies. What draws them together?

Danny and Eevee both have to wear masks to get by in their lives, Eevee as the daughter of a powerful politician, and Danny as an imposter of his parallel self. Only when they’re alone are they able to let their guards down and be their true selves. While there’s a strong, immediate physical attraction between them, I think on a deeper level they sense each other’s desire to live out who they really are, without fear of consequences. I really enjoyed writing their relationship, seeing how it evolved. As trust builds between them, they’re able to strip away the layers of pretense and protection until they can just be themselves, together. I loved how they both had such strong exteriors but were really quite vulnerable inside.

3) Tell us about the world your book is set in.

While You Were Gone is set in a parallel Phoenix, Arizona, in a United States that never recovered from the Cold War. As Danny says in Now That You’re Here, instead of ending, their Cold War “turned into an ice age”. The country functions from a place of hyper vigilance against threats both foreign and domestic. In an effort to build a completely secure society, government researchers create the ultimate surveillance apparatus, called Skylar, and choose Phoenix as the testing ground before rolling it out nationwide. Skylar turns out to be problematic on multiple levels. There are other unique and fun things about the world, as well. For example, the Gulf of California extends farther north, giving Phoenix oceanfront property. In many ways it’s the same as our world, and in other ways it’s very different.

4) What artists or musicians inspire both you and your characters?

While music inspires and informs my writing, I tend not to mention actual musicians or bands because it imposes a particular time or age on the work. That said, my characters and books have theme songs. “Renegades” by X Ambassadors is totally the theme song for While You Were Gone. To get into Danny’s mindset, I often listened to “Vicarious” by Tool. Eevee had a couple of songs: “No Light, No Light” by Florence + The Machine, and “She” by Edie Brickell & New Bohemians. There’s a more complete playlist of the songs that influenced the book on my website (http://amyknichols.com/?page_id=758). As far as art goes, I felt I could name actual artists and not age the book, particularly given the censorship aspect of the story. Many of Eevee’s favorite artists are the same as mine: Van Gogh, Klee, Picasso. I did take some liberties with the art in the story and included fictional artists alongside real ones.

5) Do you have actors or models chosen that would represent your characters well?

I don’t usually align my characters with specific actors or models, mostly because I’m afraid I’ll end up writing what I know of those actors or models into the personalities of my characters. I’d rather they be unique unto themselves. That said, if I were to cast actors as my characters, I’d choose a young Jared Leto (circa 2004) for Danny, and a current day or slightly older Isabelle Fuhrman for Eevee. A young Ben Whishaw with messy hair would make a perfect Warren.

Book One in the Series 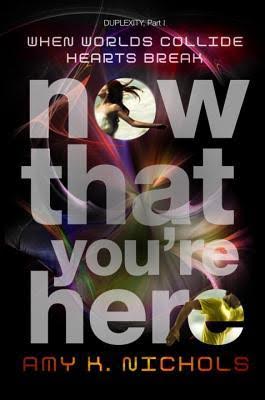 In a parallel universe, the classic bad boy falls for the class science geek.

One minute Danny was running from the cops, and the next, he jolted awake in an unfamiliar body–his own, but different. Somehow, he’s crossed into a parallel universe. Now his friends are his enemies, his parents are long dead, and studious Eevee is not the mysterious femme fatale he once kissed back home. Then again, this Eevee–a girl who’d rather land an internship at NASA than a date to the prom–may be his only hope of getting home.

Eevee tells herself she’s only helping him in the name of quantum physics, but there’s something undeniably fascinating about this boy from another dimension . . . a boy who makes her question who she is, and who she might be in another place and time.

And, coming soon, Duplexity, Part II: While You Were Gone flips this story on its head and tells the tale of the alternate Danny and the alternate Eevee, living in Danny’s parallel world.

Praise for Now That You’re Here:
“The perfect blend of sci-fi and swoons, Now That You’re Here is like no other book I’ve read. Riveting, romantic and utterly original, it kept me up late!”  –Amie Kaufman, author of These Broken Stars
“Dynamic, dizzying, and downright daring, Now That You’re Here kept me guessing until the end, and ready for the next.” –Shannon Messenger, author of Let the Sky Fall
“Nichols infuses the story with a smattering of science fiction and science fact, while making a welcome departure from the stereotype of the book-smart outcast trying to fit in. These geeks own their intelligence like a badge of honor, using science to help a friend and explore strange new worlds. Riveting in its own right, the story sets the stage for a mirror-image sequel, which will follow the other Danny and Eevee.” — Publishers Weekly, STARRED
“While the world-jumping is fantastical, the personalities and characters (fully individual, without reaching trying-too-hard levels of quirkiness) ring true…. A debut with great characters and huge nerd appeal.” — Kirkus Reviews 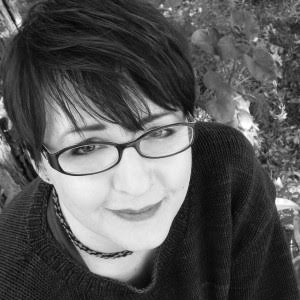 Amy K. Nichols has been crafting stories for as long as she can remember. She is the author of YA science fiction novel Now That You’re Here, to be published by Knopf December 9, 2014. The follow-up, While You Were Gone, will be published in 2015. She is mentored by award-winning crime novelist James Sallis and lives on the edge of the Sonoran desert with her husband and children. Amy is a member of SCBWI and SFWA, as well as the Class of 2K14 debut authors. Visit her online at http://www.amyknichols.com.

10 winners will receive finished copies of WHILE YOU WERE GONE. US Only.