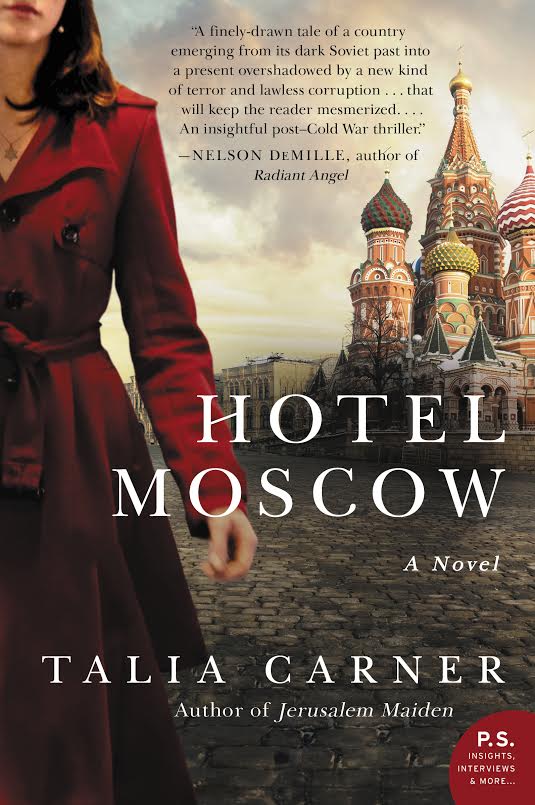 From the author of Jerusalem Maiden comes a mesmerizing, thought-provoking novel that tells the riveting story of an American woman—the daughter of Holocaust survivors—who travels to Russia shortly after the fall of communism, and finds herself embroiled in a perilous mafia conspiracy that could irrevocably destroy her life.

Brooke Fielding, a thirty-eight year old New York investment manager and daughter of Jewish Holocaust survivors, finds her life suddenly upended in late September 1993 when her job is unexpectedly put in jeopardy. Brooke accepts an invitation to join a friend on a mission to Moscow to teach entrepreneurial skills to Russian business women, which will also give her a chance to gain expertise in the new, vast emerging Russian market. Though excited by the opportunity to save her job and be one of the first Americans to visit Russia after the fall of communism, she also wonders what awaits her in the country that persecuted her mother just a generation ago.

Inspired by the women she meets, Brooke becomes committed to helping them investigate the crime that threatens their businesses. But as the uprising of the Russian parliament against President Boris Yeltsin turns Moscow into a volatile war zone, Brooke will find that her involvement comes at a high cost. For in a city where “capitalism” is still a dirty word, where neighbors spy on neighbors and the new economy is in the hands of a few dangerous men, nothing Brooke does goes unnoticed—and a mistake in her past may now compromise her future.

A moving, poignant, and rich novel, Hotel Moscow is an eye-opening portrait of post-communist Russia and a profound exploration of faith, family, and heritage.

Russia Then and Now . . .
By Talia Carner
www.TaliaCarner.com
This essay was written in December 2011, twenty years after the fall of communism.

When the Israelites fled Egypt, they wandered in the desert for forty years until the generation born into slavery had died. According to God, only a people who had known a life of freedom possessed the strength to overcome the hurdles of building a new nation in the Promised Land, and would enter it.
I understood that wisdom when I journeyed to Russia twice in 1993 to teach women entrepreneurial skills. And I am reminded of my impressions at that time today when Russians are supposed to celebrate the twentieth anniversary of democracy. Instead they are taking to the streets to protest the autocratic regime that is all too similar to the totalitarian Soviet rule it had replaced.
In late April 1993, merely sixteen months after the fall of communism, I joined a group of American businesswomen to meet courageous Russian women who traveled to Moscow and St. Petersburg from areas as far as the Ural Mountains and from far republics whose names I had never heard. Suddenly we were no longer The Enemy. They watched with awe how we walked tall, strutted about with confidence, and punctuated our talks with smiles. (They asked why so many of us were in mourning or else why would we wear black when all the colors of the rainbow were available to us?) At the edge of their seats, they clung to every bit of information we could dole out. As we spoke through interpreters to groups and individuals about business plans, marketing strategies, and pricing policies or as we lectured about advertising, promotions, and selling tactics, they took furious notes. In turn, they asked tough questions to which we had no simple answers: from how to export their homemade, poor-quality products “to America,” to how to launch a women’s political party or start a women’s bank

As hopeful and valiant as these women were, we hit a wall when we introduced the concept of networking. “Both of you. face the same problem motivating employees,” I said to two students who had found themselves running bed and beer barrel factories, respectively, after a lifetime of working on the conveyor belt sawing and gluing lumber. But the two women glared at each other with suspicion. “Look, you live over six hundred kilometers apart,” I explained. “There is no risk, and you can both benefit if you share ideas about ways to deal with business problems. You are not even selling to the same consumers!” But the women only shook their heads at my naïveté.
In a city that had never published a phone book, one’s Rolodex equivalent had become a cherished commodity. It meant survival in a country that had never had aspirin or toothbrushes in its few stores. We soon learned that expecting our students to share any information—from a reliable printing shop to the name of an English teacher—was doomed. They balked at the notion that they should help a friend, let alone a stranger. They also asked why Americans smiled so much, finding this basic human gesture incomprehensible. And the idea of attempting to connect with strangers was outright frightening. It involved eye contact! Who could imagine what disaster a stranger might bring upon you?

Traveling around the world has brought Talia Carner, former publisher of Savvy Woman magazine, a business consultant to Fortune 500 companies, and a speaker at international women’s economic forums, to find the stories right within herself. In her new novel, Hotel Moscow, she continues her mission to save and empower women. Carner hit the ground running with her first novel, Puppet Child (The Top 10 Favorite First Novels 2002,) followed by China Doll, (her platform for 2007 U.N. presentation against infanticide,) and Jerusalem Maiden (winner of Forward National Literature Award,) and now shares her passion for social justice and human rights domestically and globally. She explores the individual’s spirit as it clashes with the power of religion, social conformity, or political upheaval. She lives in New York with her husband. Please visit her at www.taliacarner.com .