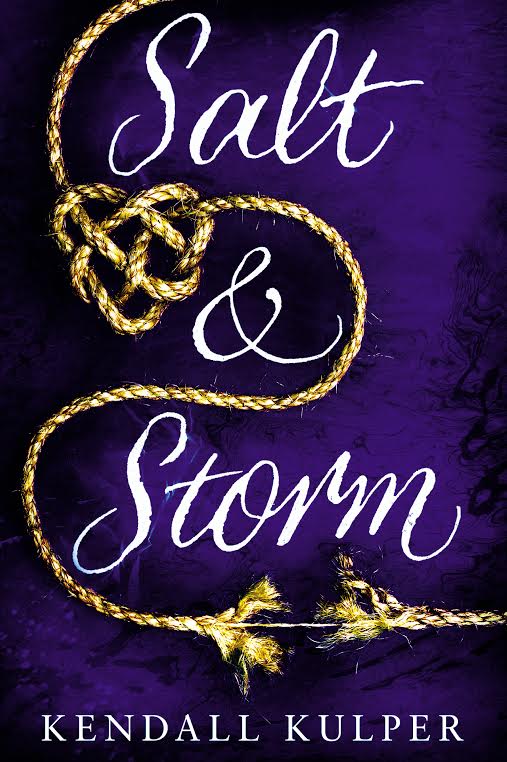 A sweeping historical romance about a witch who foresees her own murder–and the one boy who can help change her future.

Sixteen-year-old Avery Roe wants only to take her rightful place as the witch of Prince Island, making the charms that keep the island’s whalers safe at sea, but her mother has forced her into a magic-free world of proper manners and respectability. When Avery dreams she’s to be murdered, she knows time is running out to unlock her magic and save herself.

Avery finds an unexpected ally in a tattooed harpoon boy named Tane–a sailor with magic of his own, who moves Avery in ways she never expected. Becoming a witch might stop her murder and save her island from ruin, but Avery discovers her magic requires a sacrifice she never prepared for.

The Real Places Behind SALT & STORM

One of the things I’m always happy to hear from readers is that the setting of SALT & STORM, a remote whaling community called Prince Island, feels like a real place. It is, in fact, completely made up, but as I wrote about it, I drew on a lot of my memories of places I’ve visited. You might not ever be able to visit Prince Island, but here are a few of the places that helped me capture its spirit.

New Bishop, the tiny whaling town where my main character, Avery, lives, is a combination of two towns: Edgartown on Martha’s Vineyard and New Bedford on the Massachusetts coast. From Edgartown, I got the narrow brick streets and beautiful captain’s houses, as well as the idea of an out-of-commission lighthouse. 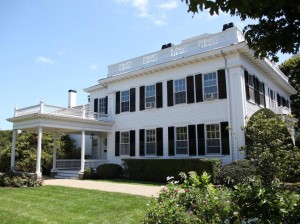 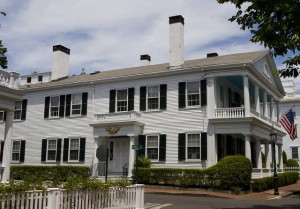 Avery lives with her mother in the nicest neighborhood on the island, and she describes the house they live in as grand, white, and airy. You can still see some of these houses, like the Captain Morse House and the Dr. Daniel Fisher House, in the heart of Edgartown’s historic district. 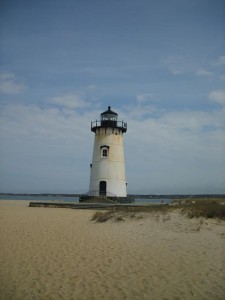 Not far from these houses is the Edgartown lighthouse, which is still open to visitors. The lighthouse underwent renovations in 2007, but for much of my childhood, it was a pretty, but somewhat rundown, sight. In SALT & STORM, Avery says of the town’s lighthouse:

“Our lighthouse is something of a joke and a curiosity… [It’s] little more than an eyesore; the island’s children had long ago smashed its windows, and faded rust leached through the white paint so that it seemed as if the poor thing was bleeding.” 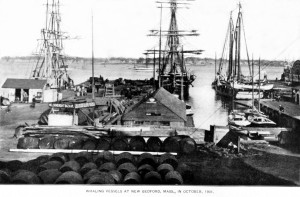 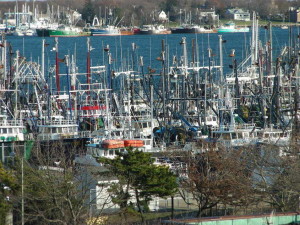 Edgartown’s docks now mostly cater to private owners, so to get a sense of a working harbor, I went to New Bedford, MA, which is still a bustling fishing center. Historic photos show how busy the docks were, but even today you can see dozens of docked boats, crowded together so thickly that their masts make a kind of forest above them. 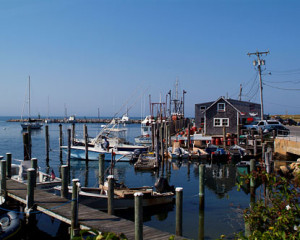 The tiny fishing village in SALT & STORM known as Weld Haven is very loosely based on Menemsha, a working village on Martha’s Vineyard and one of my family’s favorite places to great fresh seafood. Avery says of Weld Haven:

“Haven” is a touch of island humor, because unlike New Bishop’s bathtub waters, the sea at Weld Haven’s shore bites at ships and swimmers alike with rows of jagged, rocky teeth. Only tiny, flat-bottomed fishing skiffs can navigate safely out to sea, and if there hasn’t been a wreck in those waters, it’s only because there’s no captain fool enough to try them.

In real life, Menemsha is quite safe to sail from, but I always remembered it for its long rocky jetty, which was dangerous to swim too close to and gave me the idea for a fishing village set along a rocky harbor.

Prince Island is supposed to be close to Martha’s Vineyard and Nantucket, so I based its environment and landscape on those islands, especially the area around my family’s house. The Great Gray Slough in SALT & STORM is a marshy lake that Avery describes as:

“Half-mooned, it fits up against the island’s northwestern shoreline, only a spit of sand and grass separating its fresh waters from the salty sea. It’s desolate, even dreary, made up of nothing but quantities of pitch-black mud and long grasses barbed with fine stingers that slice open unsuspecting ankles and calves.”

The slough is actually based on a real ponds on Martha’s Vineyard, like Crackatuxet Cove, the Edgartown Great Pond, and Majors Cove (they’re all more fun to swim in than Avery, who’s not a fan of swimming, describes). 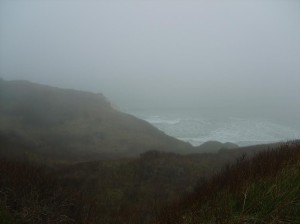 For the remote area where Avery’s family has made their home for generations, I relied on my memories of Aquinnah, a cliffy beach on the western end of the town. Aquinnah is beautiful in the sunshine but magical when it’s foggy, and I love standing at the top of the cliffs when the beach below is shrouded in fog. 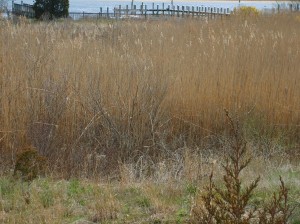 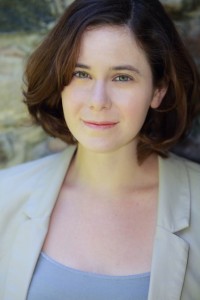 Kendall Kulper writes historical fiction with a fantasy twist for teen readers and knows more about nineteenth century whaling than she ever imagined. Her debut YA novel, SALT & STORM will be published by Little, Brown September 23, 2014. She graduated from Harvard University with a degree in history and literature in 2008 and spent several years as a journalist before deciding to write full-time. She grew up in the wilds of New Jersey and now lives in Boston with her husband and chronically-anxious Australian Shepherd mix, Abby.

2 Hardcovers of SALT & STORM US Only