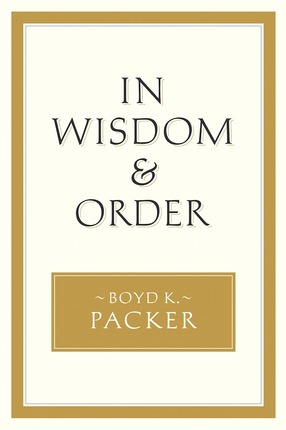 The timeless counsel King Benjamin lovingly presented to his people includes this simple and thoughtful caution: "See that all these things are done in wisdom and order; for it is not requisite that a man should run faster than he has strength. And again, it is expedient that he should be diligent, that thereby he might win the prize; therefore, all things must be done in order" (Mosiah 4:27). In this new collection of addresses, President Boyd K. Packer of the Quorum of the Twelve Apostles reiterates an ancient prophet's call to do all things "in wisdom and order." These twenty-eight chapters-selected from President Packer's conference addresses, mission presidents' seminars, and other speeches given over the past five decades-will instruct and inspire parents, youth, teachers, priesthood leaders, indeed, anyone who desires to learn at the feet of an Apostle of the Lord Jesus Christ. In this book you will find classic discussions on- Faith, "the kind of faith that causes things to happen, the kind of faith that moves people and sometimes moves things." Self-reliance, with a reminder that "you have great and powerful resources at hand. You, through prayer, can solve your problems without endlessly going to those who are trying so hard to help others." Temple covenants, which "become our credentials for admission into His presence. To worthily receive them is the quest of a lifetime; to keep them thereafter is the challenge of mortality." And much, much more. As you read the words of this faithful disciple-leader, you will recognize anew that the Savior's hand is ever present in our lives and that the gospel plan is one of great "wisdom and order," designed to return us to our heavenly home clothed in glory and righteousness.

Boyd K. Packer has always stuck out in my mind as a straightforward, inspirational speaker who is not afraid to say things as they are. Reading his words gathered in this book titled In Wisdom & Order was like a crash course in aligning your life with the Lord’s. Twenty eight chapters of addresses from his mission conference seminars, conference speeches and talks broken down into five parts:

This was a Sunday selection that you could spend weeks on, because Elder Packer puts so many scriptural references in each chapter. Perhaps the most interesting story for me was learning about the selection of J. Reuben Clark Jr. as second counselor in the First Presidency. The world had to wait six months between Conference sessions for the announcement of who the Lord has chosen. A man who had never been bishop or stake president, but a man whom the Lord had called and chosen under President Joseph Fielding Smith. Never underestimate the Lord’s capability to see what man can not see and then to reveal it to one of his servants.

There are several chapters which include poems or hymns form Eliza R. Snow. We also hear personal stories from Boyd K. Packer’s assignment as an apostle,  and earlier in his life as a World War II soldier. This is a book you’ll want have for ready reference. Once I started reading, I was tutored and taught–then shared what I learned with my family. 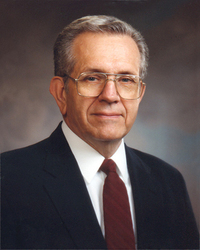 An educator by profession, his career includes service as supervisor of seminaries and institutes of religion for the Church and as a member of the Administrative Council of Brigham Young University.