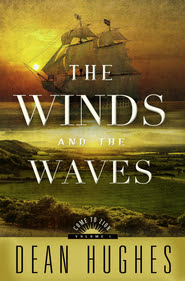 The Winds and the Waves (Come to Zion #1)

Book Summary from Goodreads: Will Lewis is stuck. the class system in England in the 1840s seems destined to keep him in his place as a poor tenant farmer who cannot improve his lot and will never be able to marry the woman he loves. But the “new religion” that is sweeping through congregations of the United Brethren, Will’s church, may hold the key to the better life he longs for. As he listens to the preaching of Wilford Woodruff, he almost dares to hope for the Zion the young Apostle describes.

Will’s struggles to believe and to face the rigors of immigrating to an unknown land are paralleled by the modern-day story of Jeff and Abby, a young married couple facing challenges of their own. When Jeff begins digging into his family history, he finds himself particularly drawn to “Grandpa Lewis,” an ancestor whose life was more like his than he would have imagined.

The skillful interweaving of these two stories brings Church history to life while demonstrating how much we can learn from those who went before us. Anyone who has ever faced the winds and the waves, in some form, will love this novel.

Review: This is the first Dean Hughes novel I have ever picked up and what drew me in were the historical elements and rich authentic detail of his writing. Mr. Hughes has researched out the setting, speech, and every day way of life of his characters.  In this case, story of Will, an Englishman living with his family as a tenant under the rule of a squire. He is wary of the religious fervor of the United Brethren and feels stuck in his place, without opportunity to improve on his circumstances to win the heart of Liz, the solicitor’s daughter. Willis cast out from his town and farm after choosing to try to trap his own meat on the squires land. Thrust into the real world and a harsh work camp, starving, and at times homeless he beings to rely on first his own strength, and later on the small whisperings of his heart.

Eventually the reader also experiences what life was for immigrants coming by ship from England to America. I had no idea how long and treacherous the journey was, nor how sick the passengers would become from indigent conditions. Infants were lost, grown men and women grew ill and died. Most make it to America and then take a steam boat up the Mississippi to find Zion. Here again we get a clear picture of what the trip would have been like, the sights, sounds and trails those who traveled would have seen. I was carried there by the rich world building and character development that occurs in the old world.

What set it back for me a bit was the present day parallel plot of Will’s descendants trying to make it as a young married couple in Nauvoo. I feel like I just could not connect with either the husband or wife, so at times the storyline dragged for me because I wanted to get back to Will and Liz’s story instead of Jeff and Abby’s.

I have already started book 2 in the series, so the answer is, yes, I enjoyed it enough that I’m excited for the next book. It was amazing to see how the timing of this read corresponded to my own family history research of my pioneer ancestors that traveled form England to Zion. The experiences were the same and historically correct! I even found one of my ancestors as an author of a book listed in Mr. Hughe’s references in the back.

Overall- fascinating, well crafted historical fiction that gives us a good taste of tenant farms in England, immigration to the United Sates, life along the Mississippi and Nauvoo, Illinois.

Content: Some intense violence, lots of fist fights and one involving a knife.

About the Author: Dean Hughes is the author of more than eighty books for young readers, including the popular sports series Angel Park All-Stars, the Scrappers series, the Nutty series, the widely acclaimed companion novels Family Pose and Team Picture, and Search and Destroy. Soldier Boys was selected for the 2001 New York Public Library Books for the Teen Age list. Dean Hughes and his wife, Kathleen, have three children and six grandchildren. They live in Midway, Utah.