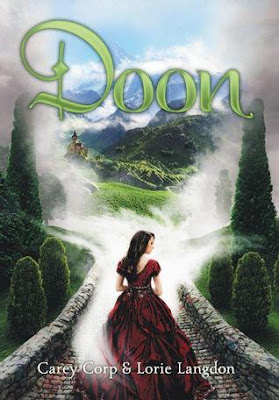 Doon
by Carey Corp and Lorie Langdon
Hardcover, 368 pages
Expected publication: August 20th 2013
by Zondervan
ISBN 0310742307
Book source: BEA
5 stars
Book Summary from series website: Despite outward appearances, Veronica Welling’s life is far from perfect. Her boyfriend is more into her competition, her mom treats her like a meal ticket, and the blond stranger who keeps appearing out of nowhere—well, he’d be darn near perfect, if he were real. After Vee catches her boyfriend cheating, an epic summer in Scotland with her best friend Mackenna Reid seems like the ultimate escape. Neither girl has any clue they’re about to step into a destiny bigger than they could ever imagine.
Through a series of clues left by Kenna’s aunt, Vee and Kenna open a portal and are transported to a thriving kingdom outside of time and place. For Vee, the land of Doon is the fairytale she’s always longed for, complete with the gorgeous blond stranger—who happens to be a flesh and blood prince. But rather than acting like her knight in shining armor, Jamie MacCrae treats her like a leper. Meanwhile, Jamie’s brother Duncan shows obvious interest in Kenna, but she shuts him down, fearing that a “love connection” will prevent her from returning to the modern world.
But the girls’ presence in Doon could break the enchantment that protects the realm. In order to save Doon, the girls must risk everything—life, love, and future—before the kingdom vanishes forever into the mists.
Doon is inspired by the premise of the musical Brigadoon, used with generous permission from the Alan Jay Lerner Estate and the Frederick Loewe Foundation.
Review: Scottish boys in kilts plus a hidden village that only appears once every 100 years…yes please! I started Doon the day I was gearing up to go to our local Scottish festival to discover my own ancestral clan and was so swept away I did not put it down until I was done. The voice, the beautiful setting and pacing come together along with awesome characters to make an unforgettable story. Part of a new imprint of Harper Collins Christian publishing called Blink, (read about the news here ) this is a magical read I will be recommending this summer! It’s told in dual points of view between two best friends Veronica and McKenna.
Verrrranica Welling is in for a surprise when her best friend invites her to Alloway, Scotland and begins having visions of a boy who is calling to her.
Walking down this beautiful street with my BFF by my side, an entire summer in Scotland stretching before us, I had to suppress the urge to dance. And, as if to make the moment even more perfect, a tall, well-built boy wearing a kilt strode toward me.

I noted the dark-blond waves of his hair, broad cheekbones, and strong nose. He radiated restless power. Wow. He was beyond gorgeous.
He drew closer, his gaze never leaving my face, and his mouth slid into a slow smile.
As he passed, his dark eyes bored into mine, and I tripped over a bump in the sidewalk. Recognition clicked into place and my heart cartwheeled into my throat. It was him—the boy who stood outside my car the day Eric and I broke up! What was he doing here?
I regained my balance, spun around, and almost slammed into an old lady. Apologizing, I stepped around her and searched the people on the sidewalk—a tall man in a knit cap, a young mother with two small children, a short middle-aged man grinning at me, but no beautiful boy in a kilt … anywhere.
“Veronica?”
Kenna walked up beside me and touched my arm, but I couldn’t speak. What were the chances of him being in Bainbridge, Indiana and now in Alloway, Scotland? And what was with the vanishing act? (excerpt from Doon originally posted at Honestly YA)
Both girls get sucked into a world they can’t escape without help and a witch’s curse older than time. The villagers are suspicious and time is running out to tip the balance of power back in Doon’s direction. The rich details and show tune spurts by Kenna make it a multi sensory read for older teens. There is definite sexual tension, and a sleepover along with a couple of mild swear words.

Overall, one of the best books I’ve picked up in a long time!  The authors whom I didn’t  know before are friendly and tweeted me when they saw I was reading the series. They’ve also created a fully interactive website with a play list, fantasy casting, Doon merchandise and photos you won’t want to miss of the kingdom MacCrea. Jump in and enjoy. As they say…Destiny awaits!
Must Pre-order!

About the authors: Carey Corp wrote her first book, a brilliant retelling of Star Wars, at the prodigious age of seven. Since then, her love affair of reinvention has continued to run amuck. Writing both literary fiction and stories for young adults, she begins each morning consuming copious amounts of coffee while weaving stories that capture her exhaustive imagination. She harbors a voracious passion (in no consistent order) for mohawks, Italy, musical theater, chocolate, and Jane Austen. Her debut novel for teens, The Halo Chronicles: The Guardian, earned her national recognition as 2010 Golden Heart finalist for best young adult fiction. Coming August 20, 2013: Doon (book 1 of the DOON series), a young adult novel loosely based on the concept of the musical Brigadoon, used with permission from the Alan Jay Lerner Estate & the Frederick Loewe Foundation, and co-written with Lorie Langdon. Carey tweets, pins, and “friends.” For more information, check out her books on Goodreads.

A few years ago, Lorie Langdon left her thriving corporate career with a Fortune 500 company to satisfy the voices in her head. Now as a full-time author and stay-at-home mom, she spends her summers editing poolside while dodging automatic water-gun fire, and the rest of the year tucked into her cozy office, Havanese puppy by her side, workingto translate her effusive imagination into the written word. Her co-written four-book series, DOON, a YA reimagining of the Scottish legend of Brigadoon, will release beginning in August 2013 from Zondervan/Harper Collins.You can find her online on Facebook, Twitter, Goodreads, and Pinterest. 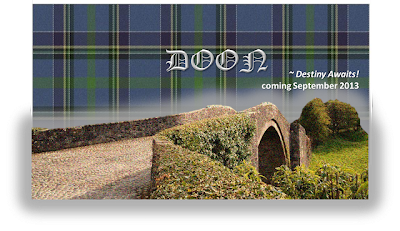 Enter to win your copy of Doon now until August 19th on Goodreads.