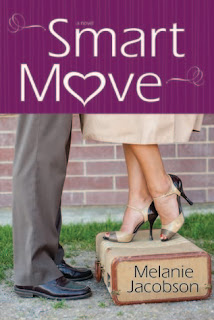 by Melanie Jacobson
Paperback, 256 pages
Published 2012
by Covenant Communications
Book source: Author
5 stars
Book summary from Deseret Book: The spark was undeniable the night Sandy Burke met the devastatingly handsome Jake. Conversation flowed easily, so after they parted, she waited eagerly for his call. It never came. A high-powered career woman at the ripe old age of twenty-seven, Sandy feels she has had her heart broken one too many times, and now the redheaded trendsetter is facing a major quarter-life crisis. After some introspection, Sandy determines that helping others may be the key to helping herself. When she’s presented with a job offer in Washington, DC, as the director of New Horizons, a nonprofit organization benefiting women in poverty, it seems providential. But now that she’s moved, two major obstacles threaten the success of her first assignment: The first is her mother and her constant fog of less-than-helpful New Age advice. Secondly, plans to build another New Horizons outreach center have come to a screeching halt, thanks to the interference of a pesky lawyer and his attempts to reverse zoning approval for the building project.
After weeks of verbal sparring over the phone, Sandy is in for a shock when she comes face-to-face with her foe. The smooth voice at the other end of the line is a heart-wrenching blast from the past. In this twist of fate, Sandy sees the perfect opportunity to ensure the success of the outreach center—and to enact a little payback on this man she thought she’d left behind. And so the battle of wits begins. Will Sandy’s “flirt-to-convert” plot sway he nemesis’s determination to block the center, or will his charming and undeniably attractive ways convince the sassy redhead to give love a second chance?
Heather’s review: Melanie Jacobson has won my heart with her clean, funny romance writing. Smart Move features a less than perfect main character which is something I appreciate. She’s the daughter of a single mother who’s been raised in a less than ideal environment, shuffled from place to place and step-dad to step-dad. She’s now found her place as a Stanford graduate working in D.C. for a major nonprofit organization. She has a job she believes in, her own space in the upper half of a house and yoga to keep her sane. But she just can’t get her mind of of one night back in Seattle and the man she met who never returned her phone call. The sparks were definitely there, but she should be over it by now!
Luckily she has a huge project going right now to keep her mind off of dating–winning the zoning approval for a program helping women make their way into the work force. The only thing standing in her way is “El Diablo” the proud and stubborn attorney who’s working hth other end of the case. The two cross paths in more than one unpleasant encounter and let the banter begin!
Sandy is spunky and unique in her spanx (tummy trimming lycra.) She has some baggage from her past but is headstrong and flirty at the same time. Main antagonist, “El Diablo” never, ever gives up. It’s so nice to see a persistent and confident man who knows how to keep the best interest of both his employer and others around him.  I thoroughly enjoyed Smart Move and would recommend it to all readers as a clean read.  You’ll laugh out loud at Sandy’s mother Margerita and her New Age goofiness as well as some of the hilarious situations Sandy finds herself in. I enjoyed the East Coast Ivy League D.C. setting as well.
If you haven’t read any of Melanie’s books yet…go, go, go!
Content: Clean

About the author: Melanie Bennett Jacobson is an avid reader, amateur cook, and champion shopper. She consumes astonishing amounts of chocolate, chick flicks, and romance novels. After meeting her husband online, she is now living happily married in Southern California with her growing family and a series of doomed houseplants. Melanie is a former English teacher and a popular speaker who loves to laugh and make others laugh. In her down time (ha!), she writes romantic comedies for Covenant and maintains her humorous slice-of-life blog. Her second novel, Not My Type, hit shelves in September. Visit Melanie on her website or blog.