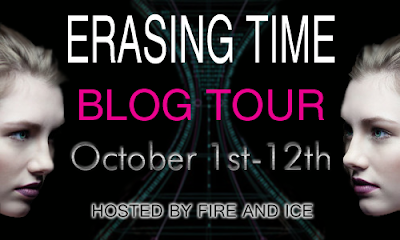 Fire and Ice is pleased to announce we will be hosting the official blog tour for Erasing Time by C.J. Hill!
We have an exclusive guest post below with the author about her “playlist” for the book. 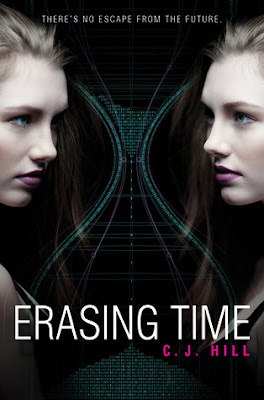 
“Some authors listen to playlists while they write their books. I envy those writers because apparently they can multi task so well they’re able to hum along to music and write at the same time.

This is the typical thing I hear while I’m writing:

Knock sounds on my door, reminding me that I’m not really 400 years in the future with a hot guy being chased by mob assassins. I am, instead, a mother of teenagers.

Son: (whining) The computer is locked!

Me: That’s because you need to do your jobs.

Me: No you didn’t. You’ve got dishes this week and the sink is over flowing.

Me: There is no possible way you did the dishes in thirty seconds. Go finish them.


So yeah, I don’t listen to a lot of music while I write. However, since MC Hammer’s song Can’t Touch this did help inspire Erasing Time, it really should have playlist status. You may wonder—and you should—how a song MC Hammer wrote about how awesome MC Hammer is, helped inspire a time traveling dystopian romance novel. I’ll explain. (If you’ve never heard the song, you can check out the official video at: http://www.youtube.com/watch?v=otCpCn0l4Wo)

When the song Can’t Touch This first came out 1990, I had never heard the phrase “Can’t touch this”. I had no idea what it meant. In fact, even though MC Hammer was singing in English I had no idea what any of the song’s lyrics meant. Take this part:

You better get hype, boy, because you know you can’t touch this

Ring the bell, school’s back in. Can’t touch this

I didn’t know whether “Can’t touch this” was a good thing, a bad thing, or perhaps a threat. I had to ask my younger and much cooler nephew to decipher the song for me. It made me think about how much slang we use, and how English doesn’t make much sense if you don’t know the slang. Really, I pity the poor immigrants who come to this country and are confronted by phrases like: “Has the cat got your tongue?” Or “Hold your horses.”

Immigrants must all wonder what we do in our free time.

Anyway, I started thinking about time travel and how you couldn’t go very far in either direction before English became undecipherable. Don’t believe it? Go watch a Shakespeare play. Chances are, unless you already know the story or you studied Shakespearean English in school, you’ll be completely lost.

Writers who write historical or time travel novels know this, of course. Usually we give a flavor or hint of the old language without being true to it. For Erasing Time I wanted to use the language shift as part of the plot. When Sheridan and Taylor are sucked into the future, historian wordsmiths are appointed to translate and interpret for them. (One of whom is a hot guy.) The only way Sheridan and Taylor can communicate secretly is to speak in slang. Which works quite well. You can cover just about any topic using slang, including escaping from mad scientists in a dystopian government.

And MC Hammer would have had no problem getting things by future scientists. Therefore, he is a play list unto himself.”
Thanks to C. J for choosing Fire and Ice to host her tour and for the fun guest post!
Follow all of the blog tour schedule for your chance to win a copy of the book on each stop.

October 2- Ravenous Readr
October 3- Fiktshun
October 4- I’m A Reader Not A Writer
October 5- Books Complete Me
October 6- The Mod Podge Bookshelf
October 7- Portrait of a Book
October 8- LDSWBR
October 9- PageTurners Blog
October 10- Reading Teen
October 11- YA Bliss
October 12- Wastepaper Prose
Hardcover, 368 pages
Published August 28th 2012
by Katherine Tegen Books
ISBN 0062123920
Book Summary From Harper Collins: When twins Sheridan and Taylor wake up 400 years in the future, they find a changed world: domed cities, no animals, and a language that’s so different, it barely sounds like English. And the worst news: They can’t go back home.
The twenty-fifth-century government transported the girls to their city hoping to find a famous scientist to help perfect a devastating new weapon. The same government has implanted tracking devices in the citizens, limiting and examining everything they do. Taylor and Sheridan have to find a way out of the city before the government discovers their secrets. To complicate matters, the moblike Dakine has interest in getting hold of them too. The only way for the girls to elude their pursuers is to put their trust in Echo, a guy with secrets of his own. The trio must put their faith in the unknown to make a harrowing escape into the wilds beyond the city.
Full of adrenaline-injected chases and heartbreaking confessions, Erasing Time explores the strength of the bonds between twins, the risks and rewards of trust, and the hard road to finding the courage to fight for what you believe in.
About the Author:  C. J. Hill is the mother of twins. They aren’t identical, but this doesn’t mean she always calls them by the right name. In fact, she occasionally calls all her children by the wrong names (she has five) and has even been known to throw the dog’s name into the mix. Laugh now, but you’ll do the same thing when you have kids.
If C. J. had a time machine and could visit another century, she would probably go to the Regency era instead of the future. According to all the novels she’s read, the past was filled with a multitude of dashing lords and viscounts who were always on the lookout for damsels in distress, whereas the future is populated by scary dystopian societies.
Find out more on her site

The Giveaway: We have one copy of Erasing Time to give away to our U. S. readers courtesy of the author and Harper Teen. Choose your own entries on the rafflecopter form below to enter.