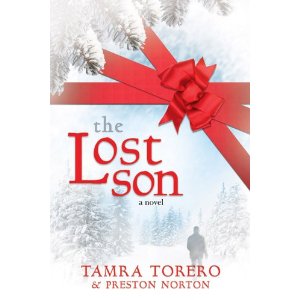 The Lost Son
by Tamra Torero and Preston Norton
Paperback, 192 pages
Expected Publication Date: October 9, 2012
by Sweetwater Books
ISBN: 1462111424
Book source: Netgalley
4 Stars
Book Summary from Goodreads: Sixteen-year-old Jacob has always been able to charm his way out of trouble with the law. But when he’s sentenced to work at a family Christmas tree farm in place of Cody Matthews—a boy killed in Jacob’s last DUI—Jacob is in for a harsh reality check. This emotional story of loss, love, and redemption is impossible to put down.
Cathy’s Review: Jacob is a normal teenager, he has a girlfriend, Melanie, but he’s not above making out with other girls, he also likes to party and that includes getting drunk. Unfortunately, Melanie quickly finds out about Jacob making out with a random girl dressed like Marilyn Monroe and breaks up with him. This was just not Jacob’s night first a fight, then getting kicked out of the great party and then Melanie breaking up with him. Jacob gets into his car to head for home, he’s driven drunk lots of times and nothing ever happens. This time though, Jacob hits another car and kills a young man named Cody Matthews while also injuring his father. When Jacob’s case goes to trial, he knows he’s going to be spending a lot of time in Juvie, but to his surprise someone speaks up for him, someone he would never have expected. Sam Matthews, Cody’s dad, tells the judge that one boys life is over and they shouldn’t ruin another boy’s life because of that. Sam asks that the judge have Jacob come to his Christmas Tree farm and help out in Cody’s place. With his arm injured, he could really use the help. Jacob is sure that this is some sort of revenge for his killing Cody on Sam’s part, and he’s afraid that Sam will try to kill him. But as he gets to know Sam, he learns that the situation is far different from the way he’s pictured it, and he slowly starts to change and to forgive himself for what has happened.
This was a cute story. I liked the characters and the plot. I thought that the characters could have been more developed at times, I really like to get to “know” the characters and it seemed like the knowing part was pretty superficial in this story. I liked how this story shows the effects that one person can have on other people’s lives. Jacob, in a moment of stupidity, killed Cody which in turn hurts Sam and also Corrine and he got to see just how both of them had been hurt and the impact that Cody dying had on their lives. I think that’s something we should all work harder to remember, just that people have feelings and most things we do are going to have an impact on others, and that impact is sometimes bigger than we would have imagined it would be.
Content: underage drinking, wolves attacking