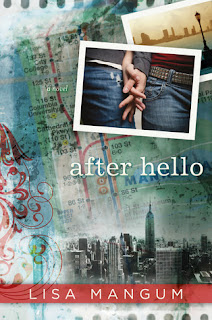 After Hello
by Lisa Mangum
Hardcover, 272 pages
Published, September 4, 2012
by Shadow Mountain
ISBN: 1609070100
Book source: Publisher
4 Stars
Summary from Goodreads: What if the first day of your relationship was the only day you had?

Seventeen-year-old Sara is a seeker. She’s always on the lookout for the perfect moment to capture with her ever-present, point-and-shoot camera, especially on her first trip to New York City.

Sam is a finder. He has a knack for finding what other people can’t—a first-edition book or the last two tickets to a sold-out Broadway show. In New York, there is always something interesting to find.

When Sam and Sara’s paths cross, neither one of them is prepared for what they will find out about each other—and about themselves when they form an unlikely partnership in search of a seemingly elusive work of art. They have one day to find the impossible. Fate brought their talents together, but what happens when time runs out? Will love be able to overcome fate? This new novel from award-winning author Lisa Mangum explores what happens after hello.

Cathy’s Review: Sara is not sure what she’s going to do in New York City all by herself for a whole day. Her dad was supposed to join her and they were going to do all the touristy things together, but as always, his company has come first. She’s pondering what to do, when she spots a boy, wearing a shirt that has the name of her favorite band, Zebra Stripes, on it. Not many people know about Zebra Stripes, so that kind of draws her to him, and she realizes just how good looking he is. She snaps a picture of him with the bookstore he’s standing by, as he turns to walk away. She knows she wants to get to know him, she knows that he could help her fill her lonely day, so she makes a split decision and goes after him. Sam is just doing his job, finding things for people when he notices Sara taking his picture. He also notices her following him, but does he want her to catch up, or does he want to move on and just do his job? He makes a split decision to at least talk to her and that changes the day for both of them. They end up being challenged to find a work of art so bold, original and fresh that movie star Piper Kinkade will love it. And what’s on the line? Only Sam’s brother’s job. This promises to be Sara and Sam’s biggest adventure yet, an adventure of discovery, not only learning about each other, but learning about themselves too!

I thought that this book was cute. I’m not sure that I was completely a fan of how the story switched points of view between Sara and Sam with every chapter. It felt a bit disjointed that way, like you were always missing just a little bit of the story and you needed that little bit to be able to understand exactly what was happening. I did like the way you found out little bits of information at a time, it made it so you could kind of imagine what the character was like, or what their life was like, and then later on in the story you could see whether or not you had been right with your imaginings. I did like the characters in this book, and the sights and sounds of New York, it was almost like you were really there. 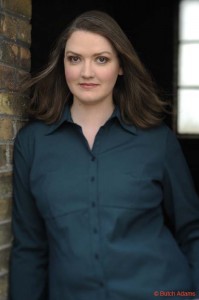 About the author: Lisa Mangum has loved and worked with books ever since elementary school, when she volunteered at the school library during recess. Her first paying job was shelving books at the Sandy Library. She worked for five years at Waldenbooks while she attended the University of Utah, graduating with honors with a degree in English. An avid reader of all genres, she has worked in the publishing department for Deseret Book since 1997. Besides books, Lisa loves movies, sunsets, spending time with her family, trips to Disneyland, and vanilla ice cream topped with fresh raspberries. She lives in Taylorsville with her husband, Tracy.
Find out more about Lisa Mangum: Website/ Goodreads