An uplifting book about the human condition and happiness, “The Rent Collector” was just released by Camron Wright and Shadow Mountain earlier this month. I met with Camron and heard him tell the story of how it all came together..
Wright’s son, Trevor, served both a church mission in Cambodia, as well as later teaching at the Cambodian Children’s Fund (CCF), a charity that rescues children from poverty. Neither he nor his father knew that the experiences he had there would eventually become the basis for the book “The Rent Collector”. When Trevor returned to Cambodia as a film major, to shoot a documentary in the city’s dump, he happened upon Sang Ly, a woman who made her living collecting and recycling garbage. Her story was so compelling that they shifted the focus of their film, “River of Victory.” After Camron viewed the footage, he was so moved by Sang Ly’s story that he wanted to use it as the basis for a new book. “The dump as a setting is so full of metaphors. While it is fictionalized, certain elements actually happened. I wanted to be able to move the characters around.”
Camron studied the culture and wrote about his son’s stories. He then went back to Cambodia with him to help shoot another film called “Finding Sang Ly.”
“After going to Cambodia in April, I worried I’d need to change elements of my story. However, I changed almost nothing. I think that’s because it’s a story about the human condition, and that doesn’t change. It was very surreal to meet Sang Ly in real life. When we presented her with a copy of the book, she laughed. She still can’t imagine why anybody would want to read a story about her. While the dumps closed in 2009, her husband goes into Phnom Pen at night, to look for recyclables in the garbage cans there, in order to provide. Even though conditions at the dump are deplorable, most of the people there are happy. Their circumstance aren’t good, but they have smiles on their faces. There’s a realization that we are all the same; we all have the same aspirations.”
Q &A with Camron Wright
What do you want people to take away from this book?
I hope it keeps their attention, that it keeps them up late reading. I also hope it will influence people for good
The most rewarding part?
I hope people enjoy the story, but it’s also a book with a purpose. A portion of royalties will go to the Cambodian Children’s Fund (CCF) and to the people who still live at the dump.
What has it taught you?
We all have a purpose and a path. It’s a matter of figuring our own journey out. I also love the book’s epigraph. It’s a quote from Buddha. “When you realize how perfect everything is you will tilt your head back and laugh at the sky.”
Any advice for aspiring authors?
I love the advice Amanda Dickson from KSL offered when I wrote my first book. She said, “Passion Finds A Way.” You can quit or say “okay, now what can I do to keep at it.”
Concerning agents and publicists, I love the words of a Martina McBride song. “Don’t give ’em what they think they want because they don’t got a clue.” Writers tend to chase what is popular. Instead, write what’s in your head and heart. Write what’s in your gut. Be true to the story that’s in you.”
Anything in the works for the future?
I have a few characters in my head, trying to get their story out. However, my focus right now is on launching this book. After the marketing slows down, I’ll see where the characters take me. Then again, I’ve also come to appreciate the Yiddish proverb “Men plan and God laughs.”
Learn more about Camron on his website/ goodreads/ twitter 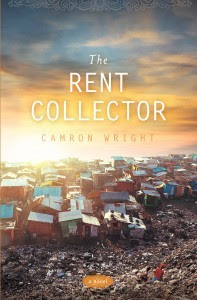 Book Description: Survival for Ki Lim and Sang Ly is a daily battle at Stung Meanchey, the largest municipal waste dump in all of Cambodia. They make their living scavenging recyclables from the trash. Life would be hard enough without the worry for their chronically ill child, Nisay, and the added expense of medicines that are not working. Just when things seem worst, Sang Ly learns a secret about the ill-tempered rent collector who comes demanding money–a secret that sets in motion a tide that will change the life of everyone it sweeps past. The Rent Collector is a story of hope, of one woman’s journey to save her son and another woman’s chance at redemption. It demonstrates that even in a dump in Cambodia–perhaps especially in a dump in Cambodia–everyone deserves a second chance.
The Rent Collector is the story of a young mother, Sang Ly, struggling to survive by picking through garbage in Cambodia’s largest municipal dump. Under threat of eviction by an embittered old drunk who is charged with collecting rents from the poor of Stung Meanchey, Sang Ly embarks on a desperate journey to save her ailing son from a life of ignorance and poverty. It’s a tale of discovery and redemption in which she learns that literature, like hope, is found in the most unexpected places.
Though the book is a work of fiction, it was inspired by real people living at Stung Meanchey.
Upcoming Costco signings:
Saturday, 9/29
12:00 – 1:30 p.m.
11100 S. Auto Mall Drive
Sandy, Utah
84070
2:30 – 4:00 p.m.
198 North 1200 East
Lehi, Utah
About the Author: Camron Wright holds a masters degree in writing and public relations. He says he began writing to get out of attending MBA school, and it proved the better decision. His first book, Letters for Emily, was a Readers Choice award winner, as well as a selection of the Doubleday Book Club and the Literary Guild. In addition to North America, Letters for Emily was published in several foreign countries. Camron lives with his wife, Alicyn, in Utah. They are the parents of four children.
Purchase The Rent Collector: Ten percent of royalties collected from The Rent Collector help disadvantaged children. The author donates to the Cambodian Children’s Fund (CCF), a terrific non-profit that assists disadvantaged Cambodian children.
The Giveaway: Here at Fire and Ice we have an ARC of The Rent Collector to give away to our readers, Choose your entries in the form below. a Rafflecopter giveaway

2 Responses to “Interview and ARC Giveaway with Author Camron Wright”