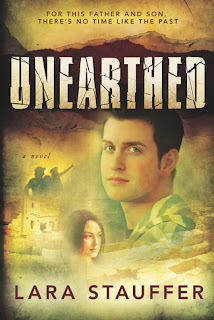 Unearthed
by Lara Stauffer
Paperback, 288 pages
Published: July 10th 2012
by Cedar Fort Books
ISBN13: 9780882909813
Book source: Netgalley
4 1/2 stars
Book Summary from unearthedthebook.com: The pilot’s voice came over the loudspeaker. “Sorry folks, it’s a bit choppy this last part. We’re slightly ahead of schedule, and the current time is 5:13 p.m. Temperature is a balmy 89 degrees, and there’s a nice wind from the east at about eight miles per hour. In other words, a perfect day for lying on a beach.”
Except I won’t be lying on a beach, Matt thought irritably. I’m going to go stare into some big crack in the ground and pretend I’m enjoying myself.

Matt’s never understood how his father could be more interested in piles of ancient rocks than his own son. While Matt was playing his way through championships and earning a basketball scholarship to Duke, his dad was always gone—too busy digging up dust to notice anything going on in the current century.

But now that he’s agreed to spend an entire month at one of his father’s digs, Matt’s about to discover a whole lot more than he bargained for in the wonders of a mysterious city that’s been lost for centuries.

This thrilling adventure is bursting with action, laugh out loud humor, and maybe even a little romance. A guaranteed page-turner from cover to cover!

Cathy’s review: Matt has never really been interested in his father’s job as an archaeologist. In fact, it’s driven a huge wedge between them to the point that Matt has no interest in anything his father is doing, including anything in Church. His dad is getting ready to head to Mexico for a big dig and his mom would love for him to go before he heads to Duke for his basketball scholarship. As his dad gets ready to leave for the dig, there’s a big earthquake in Mexico, causing a fissure to open at the dig site and exposing…something. No one really knows, what they do know is that it’s time to get down there. Matt’s dad puts getting things together to go into high gear, meanwhile Taryn, a girl that Matt has known forever and has never really liked or gotten along with because she seems a little awkward, bribes Matt into going to Mexico to see just what his dad does for a living by telling him she will tutor him with any class that he needs help with for an entire year. Matt goes, unwillingly, but little does he know that his life is about to change forever. With the help of Taryn he’s able to see that what his dad does has value, and may be a little bit interesting and that he’s been selfish and vain, and he’s able to make an astonishing find.

I really enjoyed this book. I loved the way that Matt grew from a self-absorbed party boy at the beginning of the book to a really nice guy by the end. I thought that the story was fun and engaging. I have never been on an archaeological dig and will probably never go on one, but through the eyes of Matt, I kind of understand the excitement of finding something really old that no one else has seen in a really long time. I enjoyed the way the story related to the scriptures, and I really enjoyed when the two time periods were represented side by side. The scriptures came more alive for me, especially the part filled with Gadianton robbers, which will also help teenagers, definitely a good thing!

Content: talks about teenage drinking and making out, but you don’t really “see” any of it 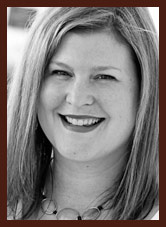 About the author: A lifelong member of the LDS Church, Lara Stauffer grew up wanting to write. A voracious reader, she loved the escape a good read would always provide. Her writing has been shaped by a deep love of the things of the past, and Unearthed is the result of her fascination with history and the people of the Book of Mormon. Lara is the author of the blogs Ramblings of a Suburban Soccer Mom and The Potted Pen, and she can be found on Facebook and Twitter. She currently lives with her husband and four children (and a maltipoo named Maggie) in North Carolina.
Find out more about Lara Stauffer: Goodreads/ Website