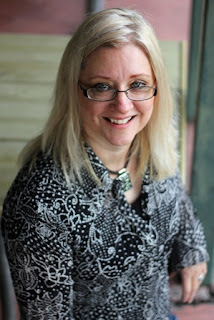 For our first Utah Book Month interview Fire and Ice met with writer Kathryn Jones, author of Conquering your Goliaths. She is currently working on Scrambled, a cozy mystery about a woman named Susan who is not happy in her marriage and thinks the grass is greener on the other side. Susan starts working as a house keeper at an old hotel and as a maid comes upon a man who has been killed. In order to prove her innocence, Susan must find the true killer. Scrambled is the first in a series, with the second book being called Sunnyside Up. Susan, the detective is an inexperienced person so she bungles and makes mistakes. It’s a fun mystery. Scrambled  has been in the works for quite a few years. Kathryn started it 2004 in a college English class and in September 2012 is finally releasing it. 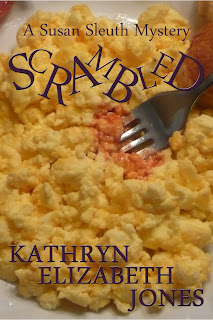 Mrs. Jones graduated in 2009 in mass communications with a minor in creative writing. She then started mentoring other writers who come to her home. Kathryn recently also started a new business others publish their writing into a finished book. Idea Creations Press is a publishing services company utilizing print on demand, or P.O.D technology. The writer owns the rights to their own work, which means that the writer gets to decide how they want to market and sell their books and they make their own profit. Once the book is in the authors hands, Kathryn and the company does not take a percentage of sales. Idea Creations Press offers writing services such as ghostwriting, blog writing, classes and workshops. They also offer editing layout and design and marketing.
Kathryn claims her inspiration for writing came in first grade when she wrote a book called “A Little Saint Dog.” After that, she always kept a journal or diary and then took a writing class in high school. When she got married and pregnant with her first daughter she was sick all the time and asked herself “what can I do in my spare time?” She sat down one day and decided to write a story. It took eight years of daily writing before she got published.
Her first piece was published in the Ensign random sampler section and she still remembers getting the $40 check in the mail. Over the years Kathryn has written for the Salt Lake Tribune and Deseret News as a freelancer and has also dabbled in journalism.
Kathryn’s first book published in 2002, A River of Stones is a good read for kids whose parents are going through divorce. It is a middle grade reader which was released through a local publishing company.
The next book, Conquering Your Goliaths: a parable of five stones was published in January and in February 2012 the next book-  a guidebook that goes along the first was published. Kathryn teaches five stones in the books. The first of these stones is listening: listen to God and be open to hearing his words. The second stone is to trust in God and trust your own abilities. The third stone is optimism- if you listen and trust in God you will be a positive person. The fourth stone is tenacity… not giving up keep going forward. And, the final stone is constancy- be constant with God no matter what may be thrown in your way. The guidebook asks reflective questions and is a workbook for people who are reading the book Conquering Your Goliaths.
Kathryn mentioned several things that have been the most rewarding experiences as a published author, “the first being reviewers to have been touched by her writing.” She said if you write a book and it changes somebody, makes them want to be a better person and you feel you’re an inspiration to others that is a rewarding experience. The second most rewarding thing about being a published author has been sharing with other writers, being with others “who are quirky like you are.” She admits that sometimes when she is writing she forgets to eat or she will stop her car and pull over to write down an idea.
Kathryn’s  favorite writers include CS Lewis, Max Lucado and Louis Lowry. She used to watch Matlock and Murder She Wrote when she was younger. Both shows made her want to write a mystery.
When asked about advice for those who want to become an author Kathryn said “for most of us it takes a few years and it’s easy to get discouraged. It takes time to get your writing to a certain level. Never give up. It takes a while to find your voice. I came to a  point when I needed to sound like me who I am. I needed to have my own voice. Even after getting published, it doesn’t mean you’ll be published easily after you’ve written your first book.”

She feels things are getting easier for authors these days Amazon’s create space program. Kathryn’s company also has a sale going right now where book can be published from manuscript, once it is edited and ready to go to a bound book.

In the past, Kathryn was a member of the League of Utah writers. She now critiques manuscripts and meets with a group of other authors as they talk about dialogue setting and voice. She teaches a class on marketing your book which is offered for free. She uses ocean waves music to clear her mind and to get mellowed for writing. She also has a book with nothing but magazine pictures in it for inspiration. She asks yourself “what am I going to read about today?” then uses the five senses to write about the picture. Her biggest suggestion to aspiring writers is to “write every day.”
One resource Kathryn also recommends for writers is the book Writing Screenplays That Sell. It teaches you about dialogue characterization and development, since authors usually do better at either dialogue or setting- one or the other and not both.
Some fun lesser-known or unique facts about Kathryn… many of her ideas for a cozy mystery came from her days cleaning houses. Kathryn loves reading Hugh Nibley. She really likes the book Approaching Zion. She said ” it’s fantastic. It’s really deep. It expands my mind and gets me thinking outside the box.” She also loves all things Egyptian. Kathryn studies the facsimiles in The Book of Mormon and the Pearl of Great Price. She loves to learn and is trying to learn how to read Egyptian.

It was a pleasure to meet with Kathryn!

Author Bio: My favorite tool is the pen. Though computer keys get the words down quicker and easier, I like to put pen to paper, smell the ink, see the words as they are developed and renewed by new phrases or thoughts. I enjoy traveling to wherever the character takes me. This often means even I am surprised and warmed at the outcome. In the end, when my writing is done, I like to watch the eyes of the reader whenever I can. Their reflective expression gives me the greatest glimpse into what my writing has become. When I am not writing I’m reading. I am an avid reader of the scriptures and books of spiritual merit. I have been married 30 years and enjoy teaching and working with youth and children-including my own three girls, three grand-daughters and grandson.
Her works: “A River of Stones,” middle-reader about divorce and step-families, (LDS) published in 2002. “Conquering Your Goliaths: A Parable of the Five Stones,” (Christian Fiction) published in 2012.“Conquering Your Goliaths: Guidebook,” (non-fiction guidebook) published in 2012. And… “Scrambled,” a Susan Sleuth Cozy mystery (the first in a series) set on the east coast.

To learn more visit Kathryn Jones at http://www.ariverofstones.com and http://ideacreationspress.com