We are today’s stop on the official blog tour for Pip Goes to Camp hosted by Cedar Fort Books and Donna L. Peterson. Here’s our 5 star review… 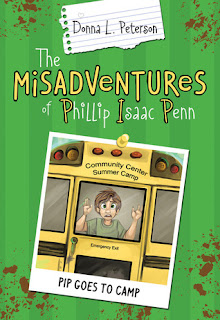 Book summary from Book’s website: Summer camp won’t know what hit them! Pip’s parents are sending him away on an adventure, but Pip’s sure a whole week at camp will be more like torture! Filled with fun comedy, eye-catching pictures, and an easy-to-follow storyline, this book is perfect for young readers and guaranteed to keep the whole family grinning to the very last page!

Cathy’s review: Phillip Isaac Penn or Pip as he’s called by everyone, is thrilled to finally be done with school for the summer. But his father informs him that he is leaving the very next day for “8 fun-filled days at summer camp!” Summer camp! Pip doesn’t want to go to summer camp, especially right after school ends. Pip’s father assures him that he is going to mature only Pip can’t find “mucher” in the dictionary, and he’s unsure of what it means or why he would even want to do it. Pip reluctantly climbs aboard the bus to summer camp only to find his nemesis, Cheater Chad, already aboard the bus. He knows there’s bound to be problems with Chad at the same camp and wants to run off the bus, but he sticks it out, only to find that Chad is not the worst boy at camp. Oh no! Join Pip and see what kind of misadventures he has in his week at summer camp.

This book was hilarious! I loved that you could sense Pip’s mischievous personality from the very first page. You can tell that he very much needs to “mucher” like his dad says. He’s always in trouble at camp, yet he’s not really a bad kid, he just ends up in the wrong place at the wrong time an awful lot. This book teaches kids to be treated how they would want to be, without sounding preachy. Kids are able to see the difference between Cheater Chad, Joker Joey, Show-Off Shad, Bossy Billy and Corrector Cora and how you really should act. This book would be a fun book to read aloud to your kids. It’s the second of The Misadventures of Phillip Isaac Penn, but it stands alone just fine. I hadn’t read the first misadventure and I had no problem understanding what is happening. I like that the book is fun for both adults and kids. 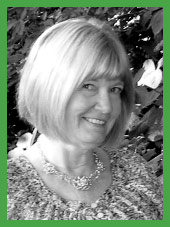 About the author: Donna Peterson has enjoyed writing stories and poetry since she was in the second grade. Donna had her first book, The Misadventures of Phillip Isaac Penn: It’s Not Easy Being a Kid, published in 2011. She has also been published four times in the Idaho Magazine and wrote a weekly humor column, “Kaleidoscope,” for the Three Rivers Chronicle. Donna recently made a difficult decision to take an early retirement from her job of twelve years with the school district so that she will be able to spend more time doing what she enjoys most: writing for young readers. However, she has signed up on the sub list, so she plans on being involved with school activities.

Donna lives in Idaho with her husband, Brad, and their three beloved pets: Rusty, Sam, and Links. Her son Erik and his lovely wife, Shawna, live in Utah. Her other son, David, just joined them as a roommate while he plans on attending a nearby college in Utah.

Along with writing, Donna’s other favorite pastimes include Zumba and photography. Having her first children’s book published last year was a dream come true.