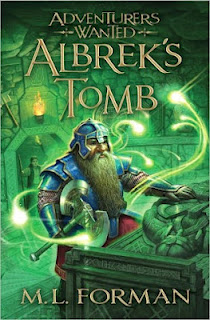 by M L Forman
Hardcover, 504 pages
Published January 24, 2012
by Shadow Mountain
ISBN: 1609088921
Book Source: Publisher
5 stars
Book Summary from Goodreads: Two thousand years ago, the dwarf Albrek went looking for new mines in the land of Thraxon in the hopes of becoming rich. No one knows if he ever succeeded, though, as all trace of Albrek and his followers simply vanished from history. Now, however, the dwarves must find the magical talisman that Albrek carried with him before their mines run dry, which would threaten the livelihood of the entire dwarf realm. And so the newly named wizard Alexander Taylor joins a familiar company of adventurers on a quest to discover what happened to Albrek, find his mythical tomb, and locate the lost talisman. Discovering Albrek s fate, however, may be the least of the adventurers problems when they cross paths with an ancient, wandering paladin who has a taste for confrontation and a paranoid belief that some great evil is working in all of the known lands. Alex and his friends must travel through the shadow of an empty oracle s tower, where a whispered legend is about to come true, and strike out for the distant parts of Thraxon that are only spoken of in old tales and half-forgotten myths. Join Alex and his brave companions on an adventure that will test their courage beyond their limits.
Cathy’s review: Alex has a lot of new choices to make in this book, choices about adventures to go on, and most importantly where he will make his home. He knows that he is welcome to stay with his step-father Mr. Roberts for as long as he would like, but he also knows that he would like to stay with his friends, maybe in the land of Alusia. He knows that the choices will need to be made, but first things first, is he ready for a new adventure? His friend and mentor Whalen has recommended him for a new adventure as a wizard, but first Alex must go meet the leader at Mr. Clutter’s adventure shop. He’s very surprised to see that the leader of the adventure is none other than his friend Trang. Trang has been asked by the king of Thraxon to find the tomb of a dwarf adventurer named Albrek. Albrek and the dwarves he took with him simply vanished and nothing was ever heard from them again. The king of Thraxon needs a special ring that Albrek carried that was most likely put in his tomb when he died. Several things don’t really add up for Alex though, the first thing being that Mr. Clutter had mentioned a second secret expedition in Thraxon at the same time. Alex decides to join the company and is happy about going on the adventure with several of his old friends and several new ones to, but this mission will tax Alex in ways that he could never even imagine.
This is such a fun series! I started reading this series just a few days ago, it really sucks you into the story and makes you want to read more and more. Alex is such a fun character, he is so strong in his beliefs of right and wrong. There is one part of the story where they find a great evil and Alex knows that no matter how close they are to finishing their adventure, he must fight this great evil and destroy it if he can, even if it means his own death. I love how Alex learns more about himself and his family history in this book. The other adventurers that he journeys with are true people of character as well. I love how this series shows that you can be a person of character and still have many great and wonderful adventures! This book is full of adventure and tons of creatures that I’ve never heard of, let alone thought of. It’s definitely a fun series for boys or girls, young or old!
Content: Clean 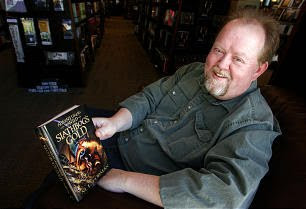 About the author: M L Forman was born and raised in Utah and now resides in the foothills of the western Rockies. He tries to write as much as possible when he’s not working as a systems administrator and attending to his many other hobbies, such as fishing, camping, hiking and almost anything that will allow him to enjoy the magic of nature.