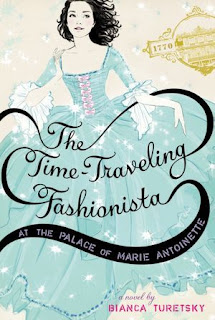 The Time-Traveling Fashionista at the Palace of Marie Antoinette
by Bianca Turetsky
Hardcover, 272 pages
Expected publication: September 18, 2012
by Poppy
ISBN 0316105384
Book source: publisher
5 stars
Book Summary from Amazon: What if a beautiful dress could take you back in time?
Louise Lambert’s best friend’s thirteenth birthday party is fast approaching, so of course the most important question on her mind is, “What am I going to wear?!” Slipping on an exquisite robin’s egg blue gown during another visit to the mysterious Traveling Fashionista Vintage Sale, Louise finds herself back in time once again, swept up in the glory of palace life, fancy parties, and enormous hair as a member of the court of France’s most infamous queen, Marie Antoinette. But between cute commoner boys and glamorous trips to Paris, life in the palace isn’t all cake and couture. Can Louise keep her cool-and her head!-as she races against the clock to get home?
Heather’s Review: Louise Lambert is another year older after her first adventure on aboard the Titanic. 13 brings with it the not so fun surprise that her father is out of work and funds are low at their home. She may have to miss her class trip to France which she and best friend Brooke have been looking forward to all summer long. To add injury to the insult, the boy she’s been after, Todd,  is seeking the attention of the cute new student from California and Tiff will be going with Todd while Louise stays home.

What better to cheer her up than another invitation to an exclusive traveling fashionista vintage sale? The address on the invitation leads Louise to a cobble stoned side street she’s never noticed before. Marla and Glenda, the witchy old shop owners are sure to have some new pieces for her to try on. Fashion is Louise’s passion- so when she sees the egg blue french ball gown tucked away she’s bound and determined to slip it on… even if it’s not what the shop owners had picked out for her. Putting int he magical gown Louise is instantly transported to another time and place. Can she survive the politics of Marie Antoinette’s court? And can she make it out in time before she loses her own head?

I enjoyed the second installment of The Time- Traveling Fashionista more than the first. I think author Bianca Turetsky has polished her writing and made the adventure realistic and suspenseful.  I can’t wait to see the full color hard back version as the ARC is missing full color illustrations and a history guide in back that will be in the final copy. Bianca brings history alive for young people in a way that makes them want to learn more. The world building was fantastic as well as the pace. There was little drag to the story; it kept me engaged the entire time. I love Louise’s obsession with all things vintage, including Polaroid cameras. I’m excited for book three an the new character, Peter. The tiny little dash of romance made things fun. This is a series I will be passing on to my children. I would recommend it for ages 9 and older as there is reference to beheading and discussion of violence from the revolution. Overall, a fast, entertaining historical fiction pick for middle grade to younger young adults.

About the Author: Bianca Turetsky graduated from Tufts University in 2001 with a BA in English literature. She moved to New York City to intern in the editorial departments of Rolling Stone and PAPER magazines. Bianca then went to work for the artist/filmmaker Julian Schnabel where she has been running his studio for the past ten years and was an assistant on the Academy Award nominated film, “The Diving Bell and the Butterfly”, as well as a feature concert documentary, “Lou Reed’s Berlin”, and his recently released feature, “Miral.” She lives in a cozy apartment in Brooklyn, New York, that houses her very extensive and much loved vintage collection. The Time-Traveling Fashionista at The Palace of Marie Antoinette will be released by Poppy September 2012. She is currently at work on the third book in the series. She is represented by Elisabeth Weed at Weed Literary and Howie Sanders at UTA.
Learn more on Goodreads/ book site/ author’s blog