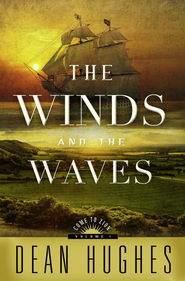 The Winds and the Waves (Come to Zion #1)
by Dean Hughes
Hardcover, 444 pages
Published May 2012
by Deseret Book
ISBN: 7816090705
Book source: publisher
4 1/2 stars
Book Summary from goodreads: Will Lewis is stuck. the class system in England in the 1840s seems destined to keep him in his place as a poor tenant farmer who cannot improve his lot and will never be able to marry the woman he loves. But the “new religion” that is sweeping through congregations of the United Brethren, Will’s church, may hold the key to the better life he longs for. As he listens to the preaching of Wilford Woodruff, he almost dares to hope for the Zion the young Apostle describes.
Will’s struggles to believe and to face the rigors of immigrating to an unknown land are paralleled by the modern-day story of Jeff and Abby, a young married couple facing challenges of their own. When Jeff begins digging into his family history, he finds himself particularly drawn to “Grandpa Lewis,” an ancestor whose life was more like his than he would have imagined.
The skillful interweaving of these two stories brings Church history to life while demonstrating how much we can learn from those who went before us. Anyone who has ever faced the winds and the waves, in some form, will love this novel.
Cathy’s review: Will is a young farmer in England in the 1840’s, he’s the oldest son so he stands to inherit his father’s place on Squire Riddle’s estate. The problem is that the system in England was not very pleasant. The squires were taking a lot of the crops that the tenant farmers grew and not really giving them anything in return, they were not allowed to hunt on the estate, the squires considered that poaching and the penalty for poaching was being kicked off their farm and left to wander wherever the could.  Knowing all this, Will set his trap anyway and ended up being caught, he was forced to leave and asked to never return. This caused will to wander to distant cities looking for factory work, but he soon realized that none of the factories were hiring any new people, and had to take a hard back-breaking job of laying railroad track. This job payed a lot more money than a factory job would have but the risks were much higher, being badly injured or even death in some cases. Unfortunately, he knew that the Liz, the girl he was in love with, would not look kindly upon his work and her father even less so. When Will is badly injured, he knows he must go home, if only for a little bit, and there he finds his family and Liz’s family have converted to a new religion. This religion seems to him to not be a good thing, but he himself is unable to doubt when he hears the Apostle Wilford Woodruff’s testimony. But will Liz’s father be able to see the changes he’s making in his life and allow him to marry his daughter?
I really enjoyed this book, I had a hard time wanting to put it down. The story of Will is compelling, it’s hard to imagine just how their lives would have been, the 1840’s in England was not a place that I would ever have wanted to live! I liked too the story of his great-grandson that parallels Will’s. Jeff and Abby too went through many trials. I had no idea that this was part of a series when I was reading it, so I got to the end and was kind of grumpy about the seemingly no resolution to the plot, but now I can’t wait for the next volume in this series to learn more about what happened to Will, Liz, Jeff and Abby.
Content: Clean

About the Author: Dean Hughes is the author of more than eighty books for young readers, including the popular sports series Angel Park All-Stars, the Scrappers series, the Nutty series, the widely acclaimed companion novels Family Pose and Team Picture, and Search and Destroy. Soldier Boys was selected for the 2001 New York Public Library Books for the Teen Age list. Dean Hughes and his wife, Kathleen, have three children and six grandchildren. They live in Midway, Utah.
Find out more about author Dean Hughes: Goodreads