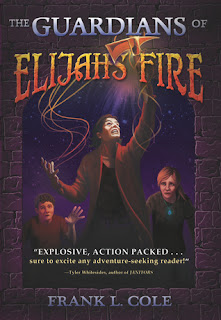 The Guardians of Elijah’s Fire
by Frank L Cole
Paperback, 272 pages
Published June 12, 2012
by Cedar Fort, Inc
ISBN: 1462110576
Book Source: Netgalley
4.5 stars
Book Summary from Goodreads: Just when they thought they were safe, Amber Trendon, and their classmates get yanked back into the action. With the Tebah Stick in enemy hands, Amber becomes a target, and it seems even her closest allies can’t be trusted. Now the gang will have to travel through enemy territory to protect a deadly ancient weapon that could cause the earth’s utter destruction.
This thrilling tale ups the action and doubles the danger. Bestselling author Frank L. Cole delivers an addicting read for adventurers of all ages.
Cathy’s Review: Things have settled down for Amber since her last adventure. She still thinks about Joseph and Dorothy occasionally, but she has other things going on, like school, homework and her very important 15th birthday. She cleans all of her birthday wishes out of her mailbox and finds a package with two very old, very important looking leather-bound books. Upon closer inspection, Amber realizes that they are the first and second Books of Kings from the Bible. She’s a bit perplexed, but just figures that Dorothy has sent them to her. She gets ready for bed and goes to sleep, only to wake to yet another nightmare of the creatures that she found in the cave as she searched for the hidden scepter, and a mysterious phone call from Joseph, warning her yet again about Dorothy. Dorothy can’t be as bad as Joseph says he is, is she? Amber doesn’t think so, but she is beginning to have her doubts. Things get really crazy the next day as Amber, Lisa and Trendon meet for dinner at a popular burger place, but their dinner is interrupted by what appears at first glance to be your basic robbery, until the robbers only want to take Amber and Joseph’s crazy uncle Jasher shows up as well. Just who can Trendon, Amber and Lisa trust to protect them from the threats that seem to appear on all sides?
I really enjoyed reading this book. The story line is packed with action and adventure from beginning to end. Amber is quite a smart character, I really enjoyed the way that you couldn’t tell until the very end who was lying and who was telling the truth. I think that this was a fun book for all ages!
Content: Clean

About the author: Frank L. Cole has lived in such exotic places as the Philippines and Kentucky, and currently lives with his wife and three children out west. While he strived for years to earn his publishing credits, Frank considers sharing his message of “Exercising Your Imagination” to over 30,000 kids across the country as his greatest accomplishment. The Guardians of Elijah’s Fire is Frank’s 5th published book and will release this June, 2012. You can learn more about his writing at franklewiscole.blogspot.com.
Find out more about author Frank L Cole Goodreads/ Blog/ Website/ Twitter