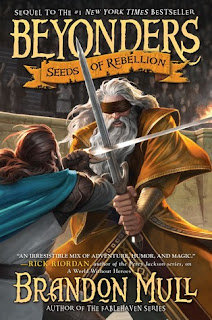 by Brandon Mull
Audiobook, 15.5 hours
Published:   March 13th 2012
by Simon & Schuster Audio
ISBN 1442346388
Book Source: Publisher
3.5 Stars
Book Summary From Goodreads: The second epic installment of Brandon Mull’s #1 New York Times bestselling fantasy series!
After the cliffhanger ending of A World Without Heroes, Jason is back in the world he’s always known—yet for all his efforts to get home, he finds himself itching to return to Lyrian. Jason knows that the shocking truth he learned from Maldor is precious information that all of his friends in Lyrian, including Rachel, need if they have any hope of surviving and defeating the evil emperor.Meanwhile, Rachel and the others have discovered new enemies—as well as new abilities that could turn the tide of the entire quest. And as soon as Jason succeeds in crossing over to Lyrian, he’s in more danger than ever. Once the group reunites, they strive to convince their most-needed ally to join the war and form a rebellion strong enough to triumph over Maldor. At the center of it all, Jason and Rachel realize what roles they’re meant to play—and the answers are as surprising as they are gripping.
Review by ephrielle:
Better than the first book. There isn’t so much of the book spent on discussing odd things like hippo oral travel; either that or I grew an immunity to oddity. Probably the later since the world is no less odd. Name it and it is done in this world. There are a few moments of mind bending discourse. Spirals of logic that are confusing.

Favorite Quote: “Are you trying to break my brain?”

Ferrin is a deeply troubled individual. He has an advanced team of debators running rampant in his mind. They have each set up camp for good and evil and he is left being a mangled mess in the middle. Their arguments are so advanced he doesn’t know who he is anymore.

There are some harrowing situations and unbelievable warriors. A world where trust is measured in the currency of flesh. As in give me a piece of your flesh so that I can kill you if you backstab me. Not a very friendly exchange.

Ever wish you could slay your enemy with a single word? Read this book and see how that would play out. Overall it was an entertaining listen. There was a section somewhere past halfway that dragged but it didn’t last too long. Very diverse group of characters and an immense catalog of dangerous situations and places. Much like a dream or nightmare brought to life; very strange. 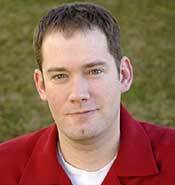 About the author: Brandon Mull resides in a happy little valley near the mouth of a canyon with his wife and three children. He spent two years living in the Atacama Desert of Northern Chile where he learned Spanish and juggling. He once won a pudding eating contest in the park behind his grandma’s house, earning a gold medal. Brandon is the author of the New York Times bestselling Fablehaven series and The Candy Shop War.