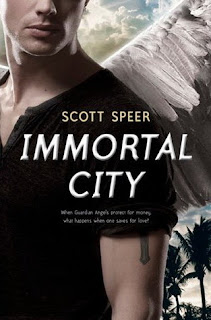 Summary from Goodreads: Jackson Godspeed is the hottest young Angel in a city filled with them. He’s days away from becoming a full Guardian, and people around the world are already competing for the chance to be watched over by him. Everyone’s obsessed with the Angels and the lucky people they protect – everyone except for Madison Montgomery.

Maddy’s the one girl in Angel City who doesn’t breathlessly follow the Angels on TV and gossip blogs. When she meets Jackson, she doesn’t recognize him. But Jackson is instantly captivated by her, and against all odds the two fall in love.

Maddy is swiftly caught up in Jackson’s scene, a world of glamour, paparazzi – and murder. A serial killer is on the loose, leaving dead Angels’ wings for the police to find on the Walk of Fame. Even the Guardians are powerless to protect themselves in the face of this threat … and this time it’s up to Maddy to save Jackson.

Crystal’s Review: This book really caught me by surprise, I had no idea when I first picked it up, even after reading the summery, that I would love it as much as I did. I was intrigued from the very first page and was unable to put the book down. I spent a full day devouring all four hundred six pages of this book. The book starts with an intriguing premise. The world is pretty much the same as the one we live in right now with one large exception. Angels have revealed them self to the world, in the story this happened hundreds of years ago and currently the Angels are idolized by almost everyone. They are guardian angels, the are immortal and most people would kill to even catch a glimpse of them. However they are not the traditional guardian angel in that their services come with a fee, and a hefty one at that. Only the richest of the people can afford the “coverage”. If you don’t have coverage than you should live life a little more carefully because there will be no angel swooping down to save you from danger.  This whole idea of guardian angels for pay really pulled me in. It was so different than anything I have ever come across in a storyline before. I found the characters were easy for me to imagine and connect with. This book has a little something for everyone. There is of course a love story but there is also murder and mystery, secrets to be revealed, and enough twists, turns, and surprises to keep you reading till the very end. After this book I will definitely be on the look out for other books by this author. 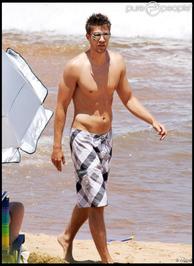 About the Author:  Scott Speer is a movie and music video director and a graduate of the University of Southern California’s School of Cinema Television. He has directed music videos for artists such as Will.I.Am, Jordin Sparks, and Ashley Tisdale and is currently directing Step Up 4. Scott lives in Los Angeles, California.

One Response to “YA Book Review- Immortal City”