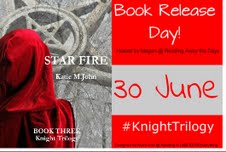 Happy Book Release Day to Star Fire,  book 3 of the Knight Trilogy by Katie M. John. To celebrate Fire and Ice is offering a huge prize package in connection with the author and Megan at Reading Away The Days. 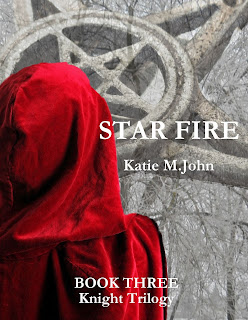 Book Summary: Egypt changed them both in ways no one ever expected. As murder and dark arts cast a terrible shadow over both The Real World and The Realm. Mina’s connection to the mysterious Star Fire Sisterhood results in her becoming The Templar’s number one suspect.
Set amongst the snowy mountains of Switzerland and the ancient magical forests of France, Blake and the House of Beldevier are given just one chance to save Mina’s life – the recovery of The Holy Grail.
In this epic heart-racing finale, ancient myths come alive and old scores are settled. One thing for sure … the clock is ticking.

Katie’s Bio:  Writer of the Amazon Best-selling YA series, The Knight Trilogy, Katie is married to a handsome giant and mummy to a mud-puddle fairy. She likes to write whilst drinking tea and eating jaffa cakes. Most of the time she lives in a fairytale world but other than that she is completely and utterly normal.
Katie’s debut YA fairtytale series, ‘The Knight Trilogy’ has become an international best-seller in several chart categories, Contemporary Fantasy, Myths and Legends, Paranormal Romance. It has also been an Amazon No 1. Best-selling Fairytale.
Her work is a blend of rich imagery and fast paced action. Before writing full length novels, Katie wrote poetry, her works being published in several anthology publications.
She is currently working on a stand alone novel called ‘Beautiful Freaks’ due to be published in Autumn 2012. A high Victorian, Gothic, Steampunk style detective story.
Learn more on her website/ twitter/ blog/ amazon
The giveaway: We are offering an awesome swag pack to one of our readers and this giveaway is open internationally.
2 Ebook set of the trilogy via smash words which is suitable for all ereaders. The set will include, Book one (The Forest of Adventures), Book two (Immortal Beloved) & Book three (Star Fire)

1 Forest of the Adventures signed postcard