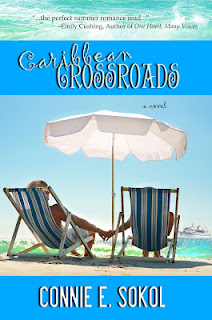 Caribbean Crossroads
by Connie Sokol
Published June 8th 2012
by Sokol Publishing
ISBN 139780615651866
Book source: blog tour
Book Summary: New college grad Megan McCormick just got dumped. Hard.
Swearing off men and relationships, Megan is coaxed into performing on a cruise ship where she meets the star performer, Bryant Johnson. Handsome and charismatic, he looks like trouble, but she can’t deny the intense attraction between them.
Urged to find a wife and run the family lumber business, Bryant is torn between his family’s expectations for his life and his own. However, when he meets spunky, but love-skittish Megan McCormick, settling down doesn’t look so bad.
Just when Megan begins to trust again, and Bryant makes some big decisions regarding his future, her former fiance returns with a malicious surprise, taking Megan and Bryant to their own CARIBBEAN CROSSROADS.
Heather’s review:  Megan has just survived the cruelest joke of all time at the hands of the man she thinks she loves and she has sworn off men forever. But leave it to her rommates to cook up a scheme that involves a cruise ship, a job dancing plus costumes to get Megan back in the dating game. She can’t deny her attraction to the man in the mango shirt who smells like the ocean and keeps staring at her. So when the two of them are paired as dance partners then keep running into each other,  things on the sea are about to pick up speed.
Connie Sokol has crafted a fun, clean romance that is a perfect summer read to take on vcactation or read by the pool. With a cute main man and a jaded protagonist some adjustments need to be a made for a happily ever after. Megan’s internal struggle and issues with trust have to be overcome.Can Bryant survive the forces that conspire against him?
You’ll love Caribbean Crossroads if you’re a fan of Melanie Jacobson or chick flicks. I recommend it as a fast, fun read.

About the Author: Connie Sokol is a mother of seven—a national and local presenter, and a regular speaker at Education Week. She is a monthly TV contributor on KSL’s “Studio 5” and regular blogger for LDSLiving online. She is a former TV and radio host for Bonneville Communications, and columnist for Deseret News and Utah Valley Magazine. Mrs. Sokol is also the author of Motherhood Matters, Faithful, Fit & Fabulous, and Life is Too Short for One Hair Color, as well as talk CDs and podcasts. Mrs. Sokol marinates in time spent with her family and eating decadent treats. Visit her website at www.8basics.com/