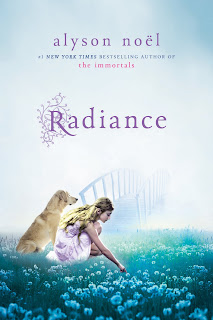 Radiance
By Alyson Noel
Paperback, 178 pages
Published August 31,2010
by Square Fish
ISBN 978-0-545-34095-3
Book Source: Bought
2 Stars
Summary from Goodreads: Riley has crossed the bridge into the afterlife—a place called Here, where time is always Now. She has picked up life where she left off when she was alive, living with her parents and dog in a nice house in a nice neighborhood. When she’s summoned before The Council, she learns that the afterlife isn’t just an eternity of leisure. She’s been assigned a job, Soul Catcher, and a teacher, Bodhi, a possibly cute, seemingly nerdy boy who’s definitely hiding something. They return to earth together for Riley’s first assignment, a Radiant Boy who’s been haunting a castle in England for centuries. Many Soul Catchers have tried to get him to cross the bridge and failed. But all of that was before he met Riley . . .
Alacia’s Review: Riley has just passed on into the Here & Now with her mom and dad, and is more than slightly disappointed to be there. Upon arrival she spends most of her time spying on her sister who is still on Earth, manifesting new outfits and avoiding going to class. When her parents are able to convince her to go to class, she is amazed at the her glowing peers and is eager to get her glow as well. However, her disappointment quickly returns when she meets her guide, Bodhi, whom she deems “Nerdy Guy.” Her disappointment in Here continues to grow as she meets The Council and watches the replay of her life. After defending herself to The Council, she is informed that she need not fret about her past life, they merely needed to review it in order to “place” her, and that her place is that of a Soul Catcher. She is elated after getting this news as it means she will return to Earth to bring spirits across to Here. As she and Bodhi set off, she is positive she will bring The Radiant Boy across without any problems even though hundreds of other Soul Catchers have failed. Once she reaches the castle where the Radiant Boy haunts, she convinces him to move on and returns to Earth with Bodhi as he attempts to bring his own assignment home.
I did not care for this book. The synopsis makes it sound like the story lies within Riley bringing The Radiant Boy across, when that actually takes place in 2 pages and moves on to Bodhi’s assignment, and quickly ends with her deciding being dead is not so bad after all. The first half of the book is literally her whining about being dead, trying to decide what to wear, and watching her sister who is still on Earth. I thought this book had awesome potential but was sad it let me down. However, if you are looking for a quick read it will definitely give you that as it is just over 100 pages. So if you are not looking for anything with a serious plot, you may enjoy this book.
Content: clean

About the Author: Alyson Noel was born on December 3rd in Orange County, CA. She has lived in Manhattan and Mykonos but has returned to her hometown in the OC. She has been on the #1 New York Times Best Selling list several times and has got a perfect score singing Bon Jovi’s WANTED DEAD OR ALIVE on Rockband! If she was something other than an author, it would be an artist, specifically a painter, and loves The Office.
Learn more on Goodreads/ her website