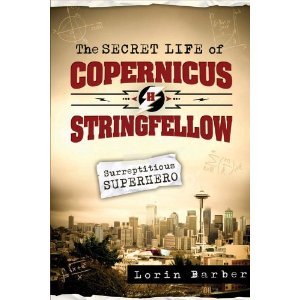 The Secret Life of Copernicus H Stringfellow
by Lorin Barber
Paperback, 304 pages
Published March 13, 2012
by Sweetwater Books
ISBN: 1599559293
Book Source: Netgalley
Rating: 3 stars
Book summary from Goodreads: Copernicus H. Stringfellow, a.k.a. Nick, is not your run-of-the-mill genius. His mind is so powerful it can stop a speeding automobile or stem internal bleeding. As Nick goes about quietly doing good, he discovers that his powers are greatly enhanced by the nutrients present in Twinkies. Follow Nick on his amazing adventures in this humorous and exciting action-packed book for all ages.
Cathy’s Review: Nick Stringfellow is a genius, some pretty crazy things happen around him. Things like guns that are pointing at him suddenly being pointed somewhere else, or really sick people all of a sudden getting over their illness and being well. He’s also very kind and always trying to help someone out, from a runaway hitchhiker to everyone in the rundown neighborhood that he’s just bought a house in. Oh and did I mention his strange Twinkie fetish? He eats them one after the next after the next, in fact, one of the first things he does when he arrives in Seattle is get on the Twinkie delivery schedule. He also gets a job as a Nurse at Large in Seattle’s Harborview Hospital. But the strange coincidences with patients getting better as Nick was spending time with them leaves the other doctors and nurses working in the hospital wondering just what in the world is up with this man! It’s up to resident Dr Prescilla Spurbeck to figure that out, but just what will she find? I enjoyed the premise of this story. Nick was a likable enough guy, although the Twinkie thing is a bit strange! I did find the story a bit disjointed just because of all the detail that Nick talks about. He’s a genius, and he talks a bit like a rocket scientist through the whole thing. I think there is some definite potential to this Twinkie eating super hero and can’t wait to read his further adventures!
Content: Clean

Author Bio: I have 6 children, 1 wife and 8 grandchildren. I spent most of my adult life as a manufacturing executive. I’ve been to 45 states and 19 foreign countries. With the loss of a business in the bad economy I’m trying to turn a hobby of writing into a new career.
Find out more about author Lorin Barber Goodreads/ Website/ Twitter