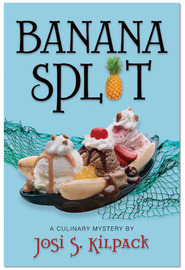 Fire and Ice is thrilled to be today’s stop on the official blog tour for:
Banana Split: A Culinary Mystery
by Josie S Kilpack
Published February 1,2012
by Shadow Mountain
Paperback, 368 pages
Source: Publisher
Rating: 5 stars
Book Summary: Sadie Hoffmiller has survived eighteen months of nonstop adventures filled with murder, deceit, and danger. She could really use some rest—and maybe even some time to heal—relaxing in the tropical paradise of Kaua’i. However, palm trees and sunshine are not as effective a medication as Sadie had hoped. And when she finds herself entangled—literally—with a dead body, she is forced to face the compounding fears and anxieties that are making her life so difficult to live.
Her determination to stay out of danger and to focus on overcoming her anxieties soon takes a backseat when she meets eleven-year-old Charlie, the son of the woman whose body she discovered near Anahola Beach. Charlies has some questions of his own about what happened to his mother, and he is convinced that only Sadie can help him. If only Sadie were as confident in her abilities as Charlie is.
With the help of her best friend and a local social worker, Sadie dives into another mystery with the hope that, at the end, she’ll be able to find the peace and closure that has eluded her.
I have long been a fan of the Culinary Mystery series by Josi S. Kilpack. Sadie Hoffmiller is a fabulous heroine. She is the quintessential nosy neighbor, yet she makes you love her from page one. Sure, she has to know everything that is going on around her, and that often gets her in trouble. But, Sadie truly cares about her friends and family.
Banana Split did not disappoint. It begins in tropical Hawaii, with an overstressed Sadie, trying to gain a little inner peace. Unfortunately, peace was in short supply, but she does discover the dead body of a missing local woman. When the woman’s now orphaned son asks Sadie for help, how can she say no? Sadie, being the busybody that she is, gets mixed up in more than she realizes when she tries to help find the cause of this young woman’s death.
Both the prose and the delicious sounding recipes will be sure to delight. This cozy mystery has many twists and turns that kept me wondering “who dunnit” clear up to the final chapters.
Content: Clean. There is discussion of drug use and possibly extra-marital affairs, but never in a way that condones the activity. 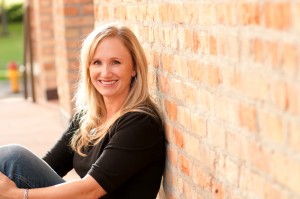 Josi S. Kilpack hated to read until her mother handed her a copy of The Witch of Blackbird Pond when she was 13. From that day forward, she read everything she could get her hands on and accredits her writing “education” to the many novels she has “studied” since then. She began writing her first novel in 1998 and never stopped. Her novel, Sheep’s Clothing won the Whitney Award 2007 for Mystery/Suspense. Lemon Tart, the first book in the Sadie Hoffmiller Culinary Mystery series was a finalist in 2009. Her most recent book, Blackberry Crumble, is the fifth book in the Sadie Hoffmiller Culinary Mystery Series. Josi currently lives in Willard Utah with her husband, four children, one dog, and varying number of chickens. Visit Josi on her website.