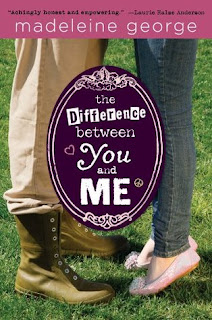 The Difference Between You and Me
by Madeleine George
Paperback, 255 pages
Expected Publication Date: March 15th 2012
by Viking Children’s Books
ISBN 0670011282
Book Source: publisher
3.5 Stars
Summary from Goodreads: Jesse cuts her own hair with a Swiss Army knife. She wears big green fisherman’s boots. She’s the founding (and only) member of NOLAW, the National Organization to Liberate All Weirdos. Emily wears sweaters with faux pearl buttons. She’s vice president of the student council. She has a boyfriend.
These two girls have nothing in common, except the passionate “private time” they share every Tuesday afternoon. Jesse wishes their relationship could be out in the open, but Emily feels she has too much to lose. When they find themselves on opposite sides of a heated school conflict, they each have to decide what’s more important: what you believe in, or the one you love?
Crystal’s Review: Sometimes in life opposites attract. This is certainly the case with Jesse and Emily. Jesse is an outspoken rebel with a cause and Emily is the popular student council vice president. One encounter in a dimly lit bathroom is all it takes for these girls to come together and realize their attraction for one another. This could be the start to a great love story, if not for the fact that Emily wants to keep the relationship where it started, in the bathroom. The difference between you and me is a touching story about love, secrets and acceptance. Each chapter I felt like I was getting to know the characters more and more. The author does a great job of describing the characters and their feelings,making if very hard to put anyone under the category of good or bad. I found this story to be a thought provoking read. Not only did it have me considering what I would do if I were in the main characters situation, it also had me thinking about the things I believe in and if I would be strong enough to stand up for those things even if I was the only one.
Content: Sexual situations, Sexuality 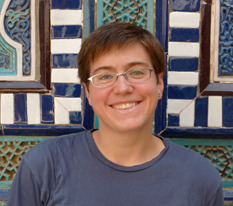 About the Author:  Madeleine George writes books and plays.

Her two novels, LOOKS and THE DIFFERENCE BETWEEN YOU AND ME, are published by Viking Children’s Books. Her plays, including THE ZERO HOUR, PRECIOUS LITTLE, and SEVEN HOMELESS MAMMOTHS WANDER NEW ENGLAND, have been developed and produced at theaters across the country. She’s a founding member of the Obie-winning playwrights’ collective 13P (Thirteen Playwrights, Inc.), and a resident playwright at New Dramatists. Madeleine grew up in Amherst, Massachusetts, and now lives in Brooklyn.