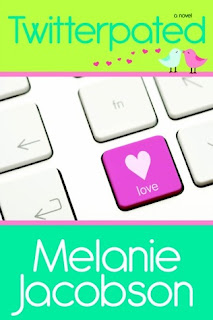 Twitterpated
by Melanie Jacobson
Paperback, 247 pages
Published March 2012
by Covenant Communications
ISBN 139781608610655
Book Source: author
4 stars
Book Summary From Goodreads: Jessie Taylor is furious when her roommate secretly posts her picture on the dating website LDS Lookup — furious, that is, until she spends all night instant messaging Ben Bratton, a man whose wit and warmth just might make Jessie forget the train wreck of her last romantic relationship. Their first date is a smashing success (literally), but Ben’s overall awesomeness can’t save Jessie from having to deal with Craig, her competitive coworker whose baiting behavior sets new standards for obnoxiousness. Determined to beat Craig at his own game, Jessie spends long office hours finishing projects and putting out fires, but while her performance wows her boss, it only makes Ben skittish — after a failed engagement to an up-and-coming lawyer, he’s not about to pair up with someone who’s married to her job. Will Jessie figure out how to be true to herself and take her big chance at love before it’s gone with a click of the mouse?
Heather’s Review: Jessie’s in her mid twenties with a well established career and not much time to spare considering she works 8o hour work weeks.  She believes in doing her best and investing herself in things with measurable results. So, when her roommate Sandy signs her up for an online dating service she is skeptical. Jessie’s love life hasn’t been so hot in the past. With a failed long-term romance and a broken heart under her belt, she’s afraid to take a chance. But Ben Bratton knows just what makes Jessie tick. He is attracted to women with drive. At the same time isn’t willing to commit to someone not committed to carve out the most important hours for him. Can Jessie put aside her over achiever turbo drive and follow her heart and will Ben wait for her to figure out the perfect balance?
Melanie Jacobson once again left me smiling and laughing at the clever dialogue between her characters. I could relate to the storyline since I myself was knee deep in a post degree career and in my late twenties when my mother signed me up for LDS Singles online. On the other end the story was my now husband Todd, whose co-workers signed him up. I had to chuckle at the similarities and am happy to announce ten years later (on the 23rd) I am still happily married to my online set up!
I whole heartedly recommend all of Melanie’s books to readers looking for a light hearted romance. She is so talented at fleshing out real life people and situations that are perfect for our generation. Her first two books The List and Not My Type are currently in the final rounds of the Whitney Awards which means she’s at the top of her game. You will adore getting to know Melanie’s style and following her blog and twitter. She is simpy brilliant!
Content: Clean

Heather
About the author: Melanie Bennett Jacobson is an avid reader, amateur cook, and champion shopper. She consumes astonishing amounts of chocolate, chick flicks, and romance novels. After meeting her husband online, she is now living happily married in Southern California with her growing family and a series of doomed houseplants. Melanie is a former English teacher and a popular speaker who loves to laugh and make others laugh. In her down time (ha!), she writes romantic comedies for Covenant and maintains her humorous slice-of-life blog. Her second novel, Not My Type, hit shelves in September. Visit Melanie on her website or blog.
The Giveaway: Fire and Ice is giving away one copy of Twitterpated courtesy of author Melanie Jacobson. To enter, choose your own entries in the Rafflecopter form below. Giveaway open to US mailing addresses only ends April 2, 2012. Good Luck!
a Rafflecopter giveaway

7 Responses to “Review and Book Giveaway-Twitterpated”