Fire and Ice is pleased to have an exclusive excerpt and guest post as part of
The Girl Unmoored Blog Tour.
Click here to read the excerpt, see our review in the post below and welcome author Jennifer Gooch Hummer for her guest post and prize pack giveaway! Guest Post
by Jennifer Gooch Hummer
Girl Unmoored: What it means to Me

I started writing Girl Unmoored when I was ten years old. I know because I still have the original notebook on which I sketched her face and wrote: A Girl Named Apron. I don’t know where the name, Apron, came from but my mother maintains that her name started out as “April.” It didn’t. But I don’t make a big deal about it; I have the notebook.

I never finished the book. Probably because there was no plot. All Apron did was pack up to go live with her grandmother, with no particular reason as to why. That’s the problem with not having a plot; the characters don’t do much.

It wasn’t until after I met my friend Mike that Apron showed up again. My Mike isn’t the same as the Mike in the book, but he too, was a dead ringer for Jesus. My Mike was an actor, although the closest he got to playing Jesus Christ was Rocky Horror, who also had long blond hair that he whipped around a lot. These hair-whipping days were in the early 80’s. Just when AIDS showed up. I didn’t know Mike then, and I barely knew about AIDS.

Girl Unmoored is the story of a girl lost in a sea of grief after losing her mother. When she meets Mike, she’s met her mooring. Although Mike and his cantankerous boyfriend, Chad, don’t know what to do with her at first-Apron just seems to keep showing up, usually with a fat lip-they eventually offer her a summer job in their flower store. And then it’s smooth sailing for Apron–until she uncovers Chad’s secret. He’s sick and there’s nothing anyone can do to save him. It’s also 1985, when no one really knows how AIDS is transmitted, or who might be at risk.

Suddenly Apron is forced to leave behind the safe harbor of childhood and navigate the stormy seas of a young adult. She knows what her real job is now, and it has nothing to do with flowers. Mike needs her to show him how to let Chad go.

Watching Mike and Chad endure in a world that despises them, Apron begins to understand that sometimes you don’t have to do anything for some people to hate you. Mean is just the way they came out. This is what Apron learns. This is what saves her. I wish my friend Mike was here to read the book. He would have liked it, I think. Especially the part about how well he sang. 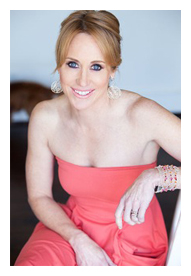 About the Author: Jennifer Gooch Hummer has worked as a script analyst for various talent agencies and major film studios. Her short stories have been published in Miranda Magazine, Our Stories and Glimmertain. She has continued graduate studies in the Writer’s Program at UCLA, where she was nominated for the Kirkwood Prize in fiction. Currently, Jennifer lives in Southern California and Maine with her husband and their three daughters. Girl Unmoored is her first novel.

Blog Tour Prize Pack Giveaway: Now through April 6th, when you comment about Girl Unmoored on Jennifer’s blog at http://www.jennifergoochhummer.com/, you’ll be automatically entered into a drawing to win a tote bag stuffed with gifts that blend the hottest 2012 e-reader with totally rad ’80s memorabilia and more! And if you purchase the book (print or e-book) and forward your receipt confirmation to contests@sparkpointstudio.com, your name will be entered to win 10 TIMES! That’s 11 chances to win the following awesome prizes:

– A Kindle Fire, just in time for spring break lounging!

– Copies of Jennifer’s Top 5 YA books: The Absolutely True Diary of a Part-Time Indian by Sherman Alexie; She’s Come Undone by Wally Lamb; Speak by Laurie Halse Anderson;The Center of Everything  by Laura Moriarty; and The Fault in Our Stars by John Green

– A gift card to 1-800 Flowers in honor of Apron’s summer job at Mike and Chad’s flower shop, Scent Appeal

The winner will be notified and announced the week of April 23rd. Good Luck!