Fire and Ice is today’s stop on the Emerald City blog tour. We are excited to have author Alicia K Leppert on our site today talking about the locations she used in her book and where they came from… 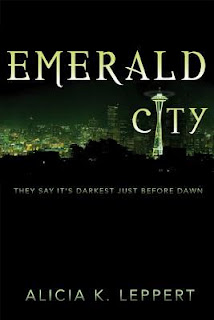 Emerald City
by Alicia K. Leppert
Hardcover, 320 pages
Expected publication: April 10th 2012
by Sweetwater Books ISBN1599558645
Book Source: Publisher
Book Summary from author’s website: Olivia Tate is a broken shell of a girl haunted by the tragic events that fill her past. She has closed herself off from the world, each day grasping at something—anything—to live for. Convinced there will never be a way out, she seeks solace in the depths of her medicine cabinet. When she wakes up days later in the hospital she is introduced to Jude, the quiet stranger responsible for saving her life. She never could have guessed then that her mysterious rescuer would end up saving her life a second time, while simultaneously turning her world upside down. A modern-day romance with a twist, Emerald City has a little bit of something for everyone!
Author Guest Post: ” I had a lot of fun picking locations in my book, and each one came from some memory or personal experience I’ve had in my lifetime. Much of the book takes place in Olivia’s apartment, which actually was something I just dreamed up based on studio apartments I’ve seen on TV and in movies. I’ve always had a thing for lofts and studio apartments in big cities, with brick or concrete walls. Although Olivia’s apartment is nothing as grand as the ones I dream about, it was roughly based on those.
The coffee shop she works in was based on a coffee shop I had breakfast in in Seattle about 12 years ago when I was visiting my sister and her family. They’re probably about a dime a dozen in the Seattle area, but whenever I wrote about Olivia at work, I thought of the coffee shop from that specific visit.
The mansion on the lake that Jude takes Olivia to is actually based on the gorgeous houses down the street from where I grew up, along the Columbia River. These houses are huge and amazing and have all those things you dream about having, like theater rooms and swimming pools and arcades. And since they’re on the river, they always have huge glass windows on the back walls, overlooking the water.
A personal favorite of mine is the location of their first “date,” on the pier. It was largely based on my husband’s and my first real date. We drove to Seattle and had dinner at Red Robin on the pier, then went on the Argosy Cruise around Puget Sound. While we waited for the cruise to start, we hung out on the pier looking out at the sound, and my husband (fiance at the time) carved our names into the wooden railing of the pier. The seafood restaurant Jude and Olivia eat at, however, was based on a restaurant we’ve visited many times at the Oregon Coast in Lincoln City.
That’s about it for the locations that had any kind of significance. All others came from some corner of my memory or imagination. But all were equally fun to create!

Alicia K Leppert’s Bio: I always knew I wanted to be a writer, ever since Career Day in first grade when I walked around carrying a notebook and pencil. Twenty-some odd years later, after a short stint in high school where I dreamed of being an actress, a whirlwind Internet romance including a blind proposal that led to a fairytale wedding and two pretty-near perfect kids, my lifelong dream came to fruition with my first novel, Emerald City. I live with my small brood in my beloved hometown of Pasco, which is located in the only part of Washington state that isn’t green. When I’m not writing, I can be found decorating novelty cakes and taking naps–my other two passions.