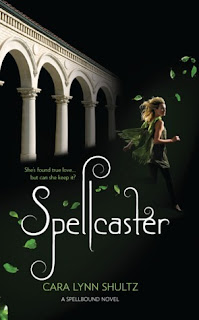 Stopping a true-love-hungry evil – not so much…

After breaking a centuries-old romantic curse, Emma Connor is (almost) glad to get back to normal problems. Although…it’s not easy dealing with the jealous cliques and gossip that rule her exclusive Upper East Side prep, even for a sixteen-year-old newbie witch. Having the most-wanted boy in school as her eternal soul mate sure helps ease the pain-especially since wealthy, rocker-hot Brendan Salinger is very good at staying irresistibly close….

But something dark and hungry is using Emma and Brendan’s deepest fears to reveal damaging secrets and destroy their trust in each other. And Emma’s crash course in über-spells may not be enough to keep them safe…or to stop an inhuman force bent on making their unsuspected power its own

Crystal’s Review: How far would you go to protect your one true soul mate? This is exactly what Emma must decide in Spellcaster, book number two, of Cara Shultz’s Spellbound series. There is something evil out destroy Emma and Brendan and only Emma can stop it. The one thing she has going for her is that she is a witch so she has magic on her side. She is a new witch though and she has not quite mastered her powers. Every chapter of this book keeps the reader on their toes. There is never a dull moment for Emma, Brendan and her best friend Angelique. Will she be able to learn to control and use her powers before its too late? You are going to have to read Spellcaster to find out! On a side note while you do not necessarily have to read the first book in the series to be captivated by this one I would suggest you do as I know it is just as good as this one.
Content: mild sexual situations, moderate swearing. 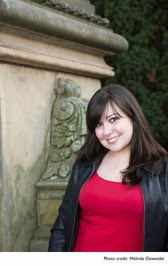 About the author: Cara Lynn Shultz’s love of supernatural writing began when she was 7 and wrote a play about ghosts, which she and her friends acted out on her grandparents’ porch. Since then, her work has appeared in Teen People, Alternative Press, Stuff, InStyle, Us Weekly, and The Guardian UK.She is a proud graduate of Fordham University and is currently a senior editor at People.com.Cara lives in her native New York City with her husband, tuxedo cat and 8 million other people. Spellbound is her first novel.
Find out more on Goodreads/ Author website/ Facebook/ Twitter

Leave a Reply to Lilly @ (LillysBookIsland)