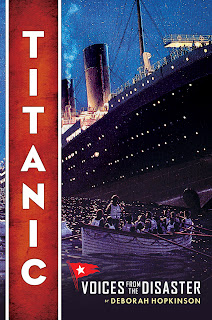 Titanic: Voices From the Disaster
by Deborah Hopkinson
Hardcover, 304 pages
Expected publication: April 1st 2012
by Scholastic Inc.
ISBN 0545116740
Book source: publisher
4 stars
Summary From Goodreads: Critically acclaimed nonfiction author Deborah Hopkinson pieces together the story of the TITANIC and that fateful April night, drawing on the voices of survivors and archival photographs.Scheduled to coincide with the 100th anniversary of the tragic sinking of the TITANIC, a topic that continues to haunt and thrill readers to this day, this book by critically acclaimed author Deborah Hopkinson weaves together the voices and stories of real TITANIC survivors and witnesses to the disaster — from the stewardess Violet Jessop to Captain Arthur Rostron of the CARPATHIA, who came to the rescue of the sinking ship. Packed with heartstopping action, devastating drama, fascinating historical details, loads of archival photographs on almost every page, and quotes from primary sources, this gripping story, which follows the TITANIC and its passengers from the ship’s celebrated launch at Belfast to her cataclysmic icy end, is sure to thrill and move readers.
Book Preview by Heather: I have always been interested by the dramatic story of the sinking of the Titanic. And as a history buff,this book appealed to me on so many levels. I love that Deborah Hopkinson used real photos of the ship and it’s passengers as well as first hand accounts. The narrative came alive for me in a way that it never has before thanks to a visually and historically rich account of that fateful night. There are so many new facts I had never heard, including he location of rescue ships in the area and the miscommunication or ignoring of warning messages from other ships nearby. Once again the tragedy of that event becomes crystal clear, but the author adds so many layers of new information that I found myself immersed from page one.
Titanic: Voices From the Disaster is an excellent non-fiction gem for both teens and adults alike. Teens will find it easy to read and interesting, chock full of well researched primary resources. I was so impressed by the amount of end notes and extras included. Deborah Hopkinson and Scholastic have given us a wonderful gift to commemorate 100 years since the Titanic’s sinking. And Here a Fire and Ice we are pleased to offer our readers a preview of one of the passenger’s stories in an exclusive guest post from the author below.

Author Guest Post
That Fateful Night
By Deborah Hopkinson, Author of Titanic: Voices from the Disaster
When I started writing Titanic: Voices from the Disaster I didn’t realize that I’d be embarking on an emotional journey. Writing about that fateful night turned out to be surprisingly difficult, even at the distance of a century. As I followed the stories of many of the passengers, officers and crew, I came to know them as real people caught up in a terrible, almost incomprehensible tragedy.
Take Jack Thayer. In the spring of 1912 he was a bright 17-year-old in his senior year of high school. Jack had taken a break from school to go with his parents on a trip to Paris, where his mother had shopped for the latest fashions. Jack was all set to start college in the fall. Everything about his life and plans, he thought, seemed certain.
But, as for so many families, this trip would change everything for the Thayer family. Jack got separated from his parents during the launching of the lifeboats after midnight on April 15, 1912, when it became clear the ship was doomed. Jack and Milton Long, a young man he’d met on board ship, stayed together as the ship’s bow sank lower and it became clear that the end was near.
Jack thought about his own death. “I thought of all the good times I had had, and of the all the future pleasures I would never enjoy; of my father and mother; of my sisters and brother. I looked at myself as though from some far-off place…”
In the final moments before the ship sank, Milton jumped from the rail, with Jack just seconds behind him. That was the last time Jack saw his friend.
Jack found himself struggling to survive in the icy water. Titanic’s second funnel toppled into the sea no more than 30 feet away, creating suction that pulled Jack underwater. When he surfaced, he found himself close enough to pull himself up on top of one of the last lifeboats to be launched, which had ended up in the water upside down.
When Jack caught his breath and looked up he realized that the ship had disappeared. The terrible cries of hundreds of people thrown into the water were fading away. The other lifeboats did not return. It was, he said later, “The most heartrending part of the whole tragedy…”
Of the 2,208 people on board the Titanic, 712 survived. Jack spent the rest of that long, cold night trying to balance on the upturned bottom of a lifeboat with other men who, likewise, were clinging to life, not knowing when help would arrive. Jack was one of the lucky ones. He was reunited with his mother on board the rescue ship, the Carpathia, early the next morning. It was only then that they both learned that Jack’s father had not survived. Jack went on to be a successful banker. He married and had two sons. But it’s hard not to wonder if the horror of that night ever truly left him. For, in 1945, at the age of 61, Jack committed suicide after his son, Edward, was killed in World War II.
About TITANIC: Voices from the Disaster : April 15, 2012 is the 100th anniversary of the sinking of the Titanic. Here is the story of the tragedy, much of it told through the stories of those who were there: the surviving passengers, officers, and crew members. The book is also packed with resources, photographs, bios of famous Titanic figures, and heartbreaking survivor letters. A great intro to the disaster for readers from 10-100. Titanic: Voices from the Disaster has received four starred reviews.
Kirkus Reviews, “In what’s sure to be a definitive work commemorating the 100th anniversary of the sinking of the RMS Titanic, Hopkinson offers a well-researched and fascinating account of the disaster.”

About Deborah Hopkinson: Deborah Hopkinson is the author of more than 40 books for young readers, including picture books, novels, and nonfiction. She wrote Hear My Sorrow in the popular Dear America series, and Shutting out the Sky, Life in the Tenements of New York. Her other 2012 books include A Boy Called Dickens and Annie and Helen. She is currently at work on a novel entitled A Trail of Coffins. Deborah serves as Vice President for Advancement for the Pacifici Northwest College of Art, an art and design school in Portland, OR. Visit her on the
web at http://www.deborahhopkinson.com/.
Pre-Order Titanic: Voices from the Disaster