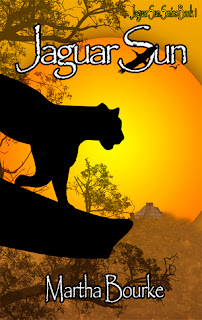 Jaguar Sun
by Martha Bourke
Ebook, 268 pages
Published December 23, 2011
by Balam Press
ISBN 0984924019
Book Source: Author
Rating: 4 1/2 stars
Book Summary from Author’s Website:  Maya Delaney is just an average sixteen-year-old. She’s busy dealing with exams, her soon to be ex-boyfriend and fitting in.
But Maya’s got bigger problems. She’s hiding a major secret from her dad and having strange visions she can’t control.
In her struggle to figure out who she is, she learns that she is meant to fulfill an ancient Mayan Prophesy and bring forth a New Age on earth.
Will the spirit magic Maya wields be enough to defeat Toltec, an evil society bent on keeping her from her destiny?
Or will that destiny destroy her?
Danielle’s Review: I was intrigued with the smart premise behind this Young Adult novel and decided to delve into the shape-shifter genre after reading the blurb.
Maya Delaney has spunk, attitude, and a rather cynical view of the world as most teenagers do. She is tight with her grandmother, and still seems grief-stricken that her mother has passed away. Her relationship with her father is tentative, but it was nice to see them grow together as the story flowered.
The story opens with suggestions that Maya is haunted by some other worldly Amazon predator, although I was a bit unclear on the implications. The story quickly develops and moves on, as she realizes her destiny as shape-shifting Mayan Goddess and the destiny resting upon her shoulders. The pacing is good, and the backstory and culture woven into the plot make for a fascinating tapestry.
The supporting cast of JAGUAR SUN is fun; family, friends, boyfriends, and villains… There were a lot to absorb, but I appreciated how each character fulfilled a role as the story came to an apex. Maya cannot save the world or herself without help from those she loves, and this concept is a comfort, and an important one, in the YA genre.
As a reader, for this genre, I would have preferred to have less language and no adult content, but I was grateful that Maya’s intimate relationship was handled with innuendo. It is a sensitive subject, for teens and for parents according to personal values.
JAGUAR SUN is a well-written, shape-shifting adventure with culture and substance. It’s an enjoyable read, and I do plan to grab a copy of the next in the series.

Content: Due to language and sensual content, some material may be inappropriate or offensive to readers.
Learn more on Goodreads/ the book website / twitter
About the Author: Martha Bourke grew up in Burlington, Vermont, often considered a hub of “free thinking.” She was encouraged to write and be creative at a very young age. Martha also had her father’s talent for languages, which later became her career. She spent fifteen years creating and teaching in foreign language programs for young children. She continued to write on the side, trying out a variety of fiction genres. Then she discovered YA – specifically, paranormal romance. She was hooked!

Martha and her husband of thirteen years have carved out their own little piece of Vermont in the Massachusetts countryside. When not writing, Martha loves spending time with her animals, good music, thrifting, and adding to her Converse collection. She is currently working on book two of the Jaguar Sun Series, Jaguar Moon