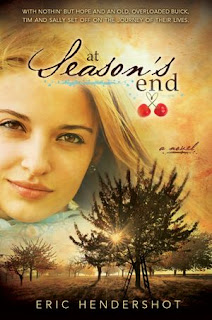 At Season’s End
by Eric Hendershot
Paperback, 176 pages
Expected Publication Date: May 8, 2012
by Cedar Fort, Inc
ISBN: 1599559951
Book Source, Netgalley
3 stars
Book Summary: Even the river didn’t stop Paw. Clothes and all, he jumped into the whirlin’, swirlin’ waters of the great Columbia.

At this Maw let out a scream. Mebby she thought Paw was goin’ to end it all. Then Tim yelled, “Oh, no, Paw!” But I was too surprised and scared to say anythin’.

I suppose it was just a second or two, but it seemed like minutes before he came up again to show us he had two heads and four arms. Then the mighty water turned him over to prove he had four legs. That was when we realized Paw was holdin’ on for dear life to a young drownin’ boy.

Hit hard by the Great Depression, Sal’s family loads up an old Buick and heads out to find work wherever they can. Driving from place to place, living off the little they can make, they soon realize they’ll never be able to afford to settle down again.

Then, when tragedy strikes, Sal and her brother must learn to fend for themselves. In a world of harsh realities, there’s no room left for romance. But that can’t stop Sal from dreaming of a life with Ben—a boy from another migrant family—even though she knows she may never see him again.

This heartwarming story about growing up in a troubled time is sure to resonate with modern readers of all ages.

Cathy’s Review: Sal is the daughter of migrant workers Maw and Paw, that’s what everyone calls them. She and her younger brother, Tim, travel the country during the Great Depression, looking for jobs that no one else wants, things like picking fruit and vegetables and cleaning hen houses and other odd jobs. Their family has an old Buick that holds pretty much everything they own in the world, but what they lack in material possessions, they make up in heart. Paw and Maw are willing to help anyone out, anyone at all. In the beginning of this story the family runs into some people having car trouble, the family could have just kept right on going down the road, but realizing that they were quite far from the nearest town, Paw hooks up the other car to his Buick and takes off almost before the other driver is able go get into his car. When they get to Oregon, completely broke, they are able to help another boy, Ben out of the wild Columbia River which in turn helps them to find a job for their family picking cherries. Not only a job, but a small cabin to stay in for awhile. Sal thinks that Ben is the most handsome boy she’s ever met, but at only 13 she knows that she needs to do some growing and changing. Life can sometimes be a pretty good teacher, but the lessons that you learn aren’t always fun and easy. I enjoyed reading this book, I was a bit confused in the first chapter about the name of the boy that almost drowns, the story called him a couple of different names in a couple of paragraphs, but this was an ARC (advanced readers copy) so hopefully by the time it comes out that will be fixed. The story was pretty short, only about 177 pages, so it’s a pretty quick read. I enjoyed learning a bit about the way life would have been during the Great Depression, especially for kids, you don’t normally see that time period through their eyes.
Content: Clean

About the Author: Eric Hendershot lives in St. George Utah. He is a writer/director (and sometimes producer) of direct-to-video family friendly feature films and a few documentaries.


Find out more on Goodreads/ Barnes and Noble