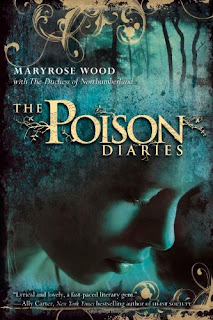 In the right dose, everything is a poison. Even love . . .
Jessamine Luxton has lived all her sixteen years in an isolated cottage near Alnwick Castle, with little company apart from the plants in her garden. Her father, Thomas, a feared and respected apothecary, has taught her much about the incredible powers of plants: that even the most innocent-looking weed can cure — or kill.
When Jessamine begins to fall in love with a mysterious boy who claims to communicate with plants, she is drawn into the dangerous world of the poison garden in a way she never could have imagined .
I had a lot of high hopes for this fascinating story about a lonely Northumberland girl and her apothecary father. The premise and the cover are both beautiful. So is the writing. THE POISON DIARIES gets off to a tentative start, but there is a poetic beauty in the words that kept me reading. The first person point of view is very well done.
Jessamine is the daughter of a healer who is famous throughout the land for his miraculous cures. Their ancient, rambling home is surrounded by gardens. Jessamine is as talented with plants as her father, but she yearns to learn more. The gated, locked up Poison Garden is forbidden. This is something she accepts, until the boy, Weed, shows up at their door. Their attraction to one another is sweet and subtle. The respect and admiration they have for one another is a strong foundation for their fledgling romance.
The mysterious Weed is charming in his innocence but almost frightening in his power as Jessamine learns of his ability to communicate with plants. More than once, I was reminded of the classic 80’s film, Edward Scissorhands. Although the setting is historical, there are parallels in the fragile beauty of Weed’s personality — a throwback to that film.
Of everything in this book, the voice of Maryrose Wood stands out. The articulation of scene, of setting and of character, is beautifully crafted. I found the words to be as haunting as the story. But THE POISON DIARIES is not a fast-paced book. It does drag along in some sequences as the young lovers struggle to hold on to one another. In contrast, the evil, eerie twist in the final pages is riveting. It definitely opens the door for more books in the series.
With reservation, I have to suggest that not everyone will find this dark, romantic tale to their liking. I would have preferred a bit more cleverness in the plotting. More sharpness in the editorial eye. However, it is a thought provoking read and a unique story that readers will be relieved to find among all the clutter of cookie-cutter Young Adult fiction.- reviewed by Danielle Thorne

About the author: Maryrose grew up in the wild suburbs of Long Island, moved to New York City at age 17 to study acting at New York University, then dropped out to be in the chorus of a Broadway musical — which flopped…Maryrose did eventually graduate from NYU’s Gallatin School. She enjoys gardening, biking, kayaking, napping, reading books and trying new vegetarian recipes. She lives in New York with her two children, two cats and a small, feisty, red-headed dog
Find more about author Maryose Wood on Goodreads/ Twitter/ her site

Read The Poison Diaries now for only 99 cents!

One Response to “Book Review- The Poison Diaries”