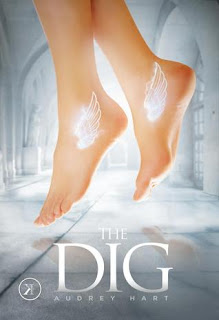 Zoe Calder has always been an outsider. Stashed away in boarding schools since her parents died, Zoe buries herself in the study of ancient worlds. Her greatest thrill is spending her summers with her archeologist aunt and uncle on digs around the world. And one day, while investigating a newly unearthed temple in Crete, Zoe discovers a luminous artifact that transports her to ancient Greece.
As Zoe quickly learns, the Olympian Gods are real, living people—humans with mysterious powers… Powers that Zoe quickly realizes she has come to possess, as well. However, when the people of ancient Greece mistake Zoe for an Olympian, the Gods must restore the balance of the ancient world… No matter what.
Zoe is forced to play a confusing and dangerous game as Hera rallies the gods against her—all except for Zeus, the beautiful, winged young god who risks everything to save her.
Out of time and out of her element, teenager Zoe Calder finds herself in ancient Greece, battling against the power of the Olympians and the vengeance of a scorned goddess—all for the strange and mysterious boy she has come to love.
This was a fun read. I have really enjoying the Gods and Godesses trend we have seen lately (probably due to the popularity of the Riordan series). Mythology has intrigued me since my high-school days when I was first introduced to Odysseus and the interesting characters he encountered along his journey. And who didn’t love Hercules?
One of the aspects of this story that I truly loved was the voice. Our teenager really feels like a teenager. She is a bit awkward; doesn’t quite fit in with the in crowd. I really identified with Zoe. While it has been years since I was a teenager (I hate to even think about how many it really has been) hearing Zoe’s worries and concerns felt so familiar. She felt very real to me.
Another aspect of this book that I enjoyed was the youthfulness of the Gods and Goddesses of Olympus. The concept that the Gods and Godesses were eternally teenagers really makes sense. Their capricious natures and self indulgent whims really make so much more sense if they are teenagers with such amazing powers.
If you like a sweet romance mixed in with an Olympian style adventure, check out The Dig, available as an ebook from Back Lit Publishing.
Content: Fairly clean. If you are uncomfortable with the use of the Lord’s name in vain, this book uses it quite a bit.
Learn more about The Dig on Goodreads/ Facebook/Entertainment Weekly