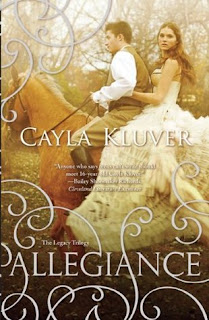 Only I saw Narian for who he truly was: a young man with courage and an independent mind, and made to pay for what was outside his control. He couldn’t help his past any more than he could help the way those intense, deep-blue eyes pierced me and held me captive.

Bound to a man she cannot love, Queen Alera of Hytanica must forget Narian, the young man who holds her heart. For Narian is destined to conquer Hytanica at the behest of his master, the powerful magic-user known as the Overlord. Alera doesn’t truly believe Narian will fight against Hytanica-until Cokyrian troops attack with Narian commanding the charge.

Faced with the greatest betrayal a heart can know, Alera must set aside personal feelings and lead her kingdom through its darkest time. And when all hope, will and courage seem lost, she must find strength and remember that even the blackest night must have a dawn….

I have to admit I requested Allegiance from NetGalley without realizing there was a book one to the series, so I’m sure my impressions will be different than others who are familiar with Legacy. The cover and book description pulled me in! Fans of the Girl of Fire and Thorns, Shannon Hale’s Books of Bayern or Maria V Snyder’s Study Series will enjoy this one. It’s a mix of historical YA fiction and fantasy. The author published the first at age 17- holy moly folks!  I was impressed after reading her interview and am sure the writing will continue to get even better as she matures.

Allegiance starts out with Alera and Steldor being newly married an crowned King/ Queen of Hytanica. It is painfully obvious that Alera is still in love with someone else and does not welcome the marriage in any way. To be honest since Narian, her true love barely shows up in this installment and I didn’t know the back story I had a hard time empathizing. I was disappointed in Alera’s hardness toward Stledor, even when human empathy would dictate something else. What little interactions they did have I found to be the most fascinating parts of the book. There is lively batner and tension which added to the personality of the plot. I sympathized with Steldor and think he was acting as any other 22 year old man placed in charge of a kingdom would act. He is passionate and though has temper, I could see he was truly trying his best to be patient with Alera’s complete shunning. When he becomes badly injured Alera just stands by…WHA!?

There is very strong character development in Allegiance. I particularly liked Canaan and London. The women seemed to be purely victims which did not bode well with me. The only exception being Alera and the High Priestess, neither of which I connected with. I couldn’t sympathize or agree with the way things turned out.

But bottom line….Did I enjoy the book? You bet! The cover is goregous, the writing and the depth of character were spot on. I can’t wait to read book three, Sacrifice. I’m hoping Steldor gets some reward and that I see some of why Alera is so head over heels with Narian. There is some heavy war related violence and talk of sex between husband and wife, though not explicit. The tone becomes a little dark in places, so may be best for 14 and older. Thanks so much to Harlequin Teen for the sneak peek! 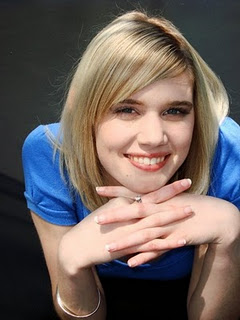 About the author-Cayla Culver is a YA author represented by Kevan Lyon of the Marsal Lyon Literary Agency. Her first three books, Legacy, Allegiance, and Sacrifice, will be published starting in July 2011 by HarlequinTEEN. The trilogy (or parts thereof) has also sold in 16+ foreign countries.

One Response to “Book Review- Allegiance by Cayla Kluver”