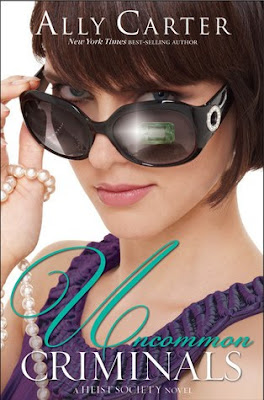 The love interests, Hale and Nick…how is one to decide? Chemistry is building between Kat and the two young men who wish to capture her attention when her heart is wrapped up in the thrill of the steal. I haven’t had this much fun with a love triangle in a long time! Hale is ever the perfect gentleman and loyal companion, while Nick seems to pop up unexpectedly to stir things up. Overall, Uncommon Criminals is a squeaky clean read I’d highly recommend to all readers ages 12 and up. Ally Carter is a master mind of deceit and twist of plot. Her clever style will capture you instantly, and if you haven’t picked up book one, Heist Society yet, get thee to your nearest store or library to get started today!

We are giving away one copy of Uncommon Criminals to our followers as part of Best I’ve Read 2011. To enter to win click here and fill out the form. Good luck! Be sure to check the BIR home site for today’s additional giveaways!