Our Best I’ve Read 2011 choice for day two is Die for Me by Amy Plum. We have the official book playlist as well as one copy donated by the author and publisher for giveaway. 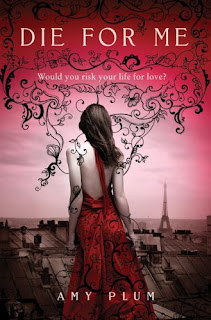 My life had always been blissfully, wonderfully normal. But it only took one moment to change everything.

Suddenly, my sister, Georgia, and I were orphans. We put our lives into storage and moved to Paris to live with my grandparents. And I knew my shattered heart, my shattered life, would never feel normal again. Then I met Vincent.

Mysterious, sexy, and unnervingly charming, Vincent Delacroix appeared out of nowhere and swept me off my feet. Just like that, I was in danger of losing my heart all over again. But I was ready to let it happen.

Of course, nothing is ever that easy. Because Vincent is no normal human. He has a terrifying destiny, one that puts his life at risk every day. He also has enemies . . . immortal, murderous enemies who are determined to destroy him and all of his kind.

While I’m fighting to piece together the remnants of my life, can I risk putting my heart—as well as my life and my family’s—in jeopardy for a chance at love?

Kate is a recently orphaned teen who has moved with her sister Georgia to Paris from the United States. The death of both her parents turns her inward, cutting off socially and finding relief in books, museums and hidden cafes. Kate is so completely immersed in grieving and going through the motions of life, which all changes the day she spots a handsome dark boy watching her intensely and she returns the stare. Vincent is kind and wise, handsome and chivalrous, but a little rusty on his people skills. So the two of them have many waters to navigate before they decide to get to know each other and trust one another. Their attachment, while seemingly immediate, takes trials and time to come into fruition.

Die for Me captured my attention so fully that from the moment I picked it up yesterday morning to the completion of the book at the very end of the day, I fell into the story and could not come out. Amy Plum paints a lush beautiful portrait of Paris from a native eye and sketches each character out fully and realistically. Harperteen does not disappoint with the quality of books they are releasing in the paranormal YA genre. Everything about this book felt new and untouched. The concept of revenant, the mythology and plot are spot on and achingly romantic. Besides falling in love with the main characters, I found a place in my heart for each member of the cast. Especially for funny, flirty Jules and Kate’s older sister Georgia. I hope book two will flesh out full roles for them. I also have my fingers crossed that the publisher chooses to stick with the cover on the advanced reader’s edition. It is breathtaking with Kate in a red boat on the Seine.

What can I say other than I won’t forget this book. I’m literally speechless. Die For Me leaves a mark in my mind as fresh as a stoke of a paintbrush and as lasting as a masterpiece. There are a few gruesome scenes that make it for readers who can stomach violence. Otherwise it is refreshingly clean and absolutely amazing. I love that it highlights the arts and history of France as well as close family relationships. Will I be picking up book two? As soon as I can get my hands on it! 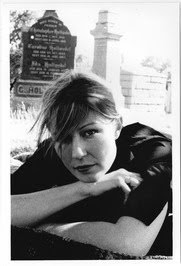 About The Author: Amy Plum is the author of the International Bestseller DIE FOR ME, which is an Indie Next List pick, Romance Times top pick, and recipient of a starred review from School Library Journal. DIE FOR ME is the first novel in a YA trilogy set in Paris.

After being raised in Birmingham, Alabama, in a rather restrictive environment, AMY PLUM escaped to Chicago to an even more restrictive environment at a university that expelled people for dancing. (And where she was called to the dean’s office for “wearing too much black”.) After all of that restrictiveness, she was forced to run far far away, specifically to Paris, France, where she only wore black and danced all she wanted.

After five years in Paris, she ventured to London, where she got an M.A. in Medieval Art History, specializing in Early Sienese Painting (1260-1348) mainly because it promised almost no hope of finding a paying job afterward. During grad school she married a ridiculously handsome Frenchman named Laurent, who she subsequently dragged with her to New York after securing her degree.

Amy worked in the world of art and antiques in New York, while Laurent used his French guy charms and started a very cool wine shop in Brooklyn. But after almost a decade of high-pressure lifestyle in the Big Apple, they decided to swap their American city for a French village of 1300 inhabitants. With their Bronx-born big red dog Ella, they moved to a tiny town in the Loire Valley down the road from Laurent’s father.

After signing with HarperCollins for the DIE FOR ME series, Amy left her job as an English professor at Tours University to write full-time. She juggles restoration of their old French farmhouse, with writing fun stories in her hundreds-of-years-old office (a stone house on the other side of her garden), and playing with her two extremely energetic pre-school age children.
She is a huge fan of Edward Gorey and Maira Kalman (and collects both of their books/art), as well as David Sedaris, Amadeo Modigliani, and Ira Glass.