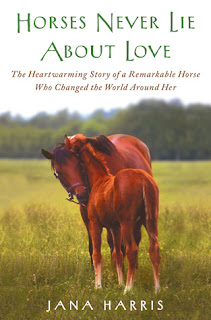 When Jana Harris moved with her husband to Washington State for a teaching job, she realized that she could also fulfill her lifelong dream of having a horse farm. And Harris knew the horse on whom she could build her dreams the minute she saw her on a ranch in the Eastern Mountains where a herd had been corralled to be sold: a beautiful, deep dark red–colored mare known as a blood bay, standing about sixteen hands, with a pretty head with a white star and a narrow stripe that slid down her face to two black nostrils. Something about the way the mare guarded her handsome foal, a black two-month-old 200-pound colt, spoke to Harris. The mare was named True Colors.

But when True Colors was delivered to Harris’s ranch three months later, she was unrecognizable. She had gone feral, run away, and been recaptured. Terrified of people, she was head-shy from the infected sores on her face and her lungs were damaged by smoke-induced pneumonia. She sensed demons hiding in everything from the scent of fabric softener on clothes to a gate in a fence. Her will to escape was enormous. This injured, traumatized horse existed between two worlds—wild and domesticated—and belonged to neither. But there were glimmers of hope: The other horses fell in love with her on sight, just as Harris had. And true to her name and herself, True Colors would never pretend to be something she was not; with her wise, intuitive nature, she would end up changing the lives of everyone she encountered, animal and human.

Horses Never Lie About Love is the story of this remarkable horse and the revelations about life and love that she gave Harris over the course of their decades together. Now thirty-three years old, this complex, magnetic animal retains the outsize personality that transforms everyone around her, both human and equine. True Colors has grown to become the heart of the range and the farm, her quiet wisdom transmitting a strength of character that transcends the thin line between animals and the humans they love. There is a famous horseman’s saying: A horse never lies about its pain. But maybe we should also consider: A horse never lies about love. 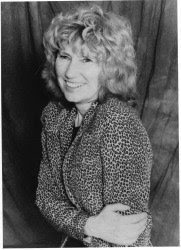 About the Author: A poet, novelist, short story writer, and essayist, Jana Harris has been a Washington State Governor’s Writers Award winner and a PEN West Center Award finalist. Born in San Francisco and raised in the Pacific Northwest, she worked for six years as director of Writers in Performance at the Manhattan Theatre Club in New York. She now lives with her husband in the foothills of the Cascade Mountains, where they raise horses. She studies the riding discipline of dressage and competes.

Ms. Harris teaches creative writing at the University of Washington. She is editor and founder of Switched-on Gutenberg (http://www.switched-ongutenberg.com/), one of the first electronic poetry journals of the English-speaking world. Her seventh book of poems, The Dust of Everyday Life, an epic concerning the lives of forgotten Northwest pioneers, (Sasquatch) won the 1998 Andres Berger Award, and she has been twice nominated for the Pulitzer (for Manhattan as a Second Language and Oh How Can I Keep On Singing?). In 2001 she won a Pushcart Prize for poetry for her poem “I Drive You From My Heart.” More information at http://www.janaharris.net/

View the full blog tour schedule and more about the book here:
Click here to read an excerpt.

We are giving away one copy of Horses Never Lie about Love courtesy of Simon & Schuster as part of the blog tour. To enter click here and fill out the form. Giveaway ends November 9, 2011. A big thanks to Simon & Schuster for the chance to be a part of their tour!