Fire and Ice is happy to be participating in the Indelible Blog Tour hosted by Once upon a Twilight and Lani Woodland. Today we are sharing our review of 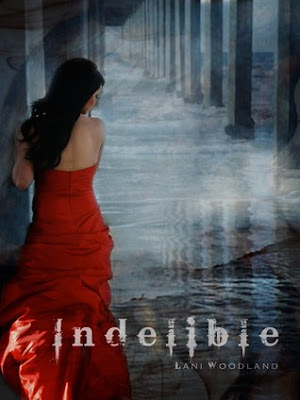 The Yara Silva Trilogy #2
Indelibleby Lani Woodland
Hardcover, 416 pages
Expected publication: September 27th 2011
by Pendrell Publishing
ISBN 0982729723
4 stars
Yara is beginning to understand just how much her life will change now that her Waker abilities have emerged. She has come to terms with the fact that seeing ghosts is part of her life, but she isn’t ready to let being a Waker dictate her choices. All she wants is a ghost-free senior year with her boyfriend, Brent, and her best friend, Cherie. But Yara soon discovers that there are more dark secrets in her school’s history than just the curse she broke. While an angry ghost makes Yara question everything she thought she knew about spirits, she and Brent learn that there are long reaching consequences to last year’s adventures. As new enemies emerge and old ghosts resurface, Yara finds herself in the center of another deadly mystery, and this time she has to contend with the living as well as the dead.
Book one of the Yara Silva series, Intrinsical was one of my very favorite reads of last year, so of course I jumped on the chance to read the second book in the series. Lani does a wonderful job of creating suspenseful horror and historical ghost stories. Indelible picks up with Yara having returned to Pendrell Academy after spending the summer in Brazil with her grandmother and the matriarca of the Wakers, Vovo. Things swing into full motion quickly as she and Brent are pulled into yet another creepy mystery–this time involving the wife of Pendrell’s founder, the long red haired Sophia. And let me tell you….this ghost has a nasty temper!
Weaving historical facts from the local area into the storyline Lani Woodland introduces us to a mysterious group called “The Clutch” and the residual murder mystery that still haunts the alumni house. Meanwhile, Brent is fighting some demons of his own and he and Yara have to weather more than one storm physically and emotionally. We are introduced to a new character DJ who annoyingly calls Yara “cupcake” and are graced once again with the supernatural sleuth skills of Christy and Steve. There are layers upon layers of things going on in Indelible . It is one fast paced little ride.

I love that Lani gave Trader Joe’s a cameo appearance and I’m sure hoping we learn more about the American Waker Yara spotted there in book three. I won’t miss Inevitable which is set to come out next year. Thanks so much to Yara from Once Upon A Twilight and author Lani Woodland for giving us a sneak peek and inviting us to be a part of the Idelible blog tour. My suggestion: read this one with the light on and far away from a pool!

Content: Moderate violence, some blood and horror, making out. No swearing or sex. Recommended for teens 16 and older.

We have a couple of Intrinsical/ Indelible bookmarks to give away courtesy of the author, Lani Woodland. Simply comment below to enter. Open Internationally. Ends October 20, 2011.

Leave a Reply to Krystal Larson