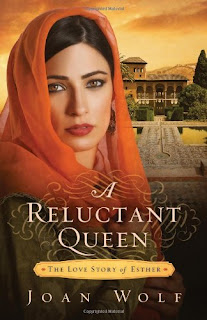 An inspired re-imagining of the tale of Esther, a young Jewish woman thrust from a life of obscurity into a life of power, wealth, intrigue . . . and tender love.

See the story of Esther in an entirely new way-with all the political intrigue and tension you remember, but told as a passionate and tender love story between a young man and woman. Misunderstood by many, King Xerxes was a powerful but lonely man. Esther’s beauty caught the eye of the young king, but it was her spirit that captured his heart.

Imagine anew the story of Esther, one of our faith’s great heroines, destined to play a key role in the history of Christianity.

I enjoyed this sweet romance set in the time of Esther. The author has made some changes to the original bible story (she does not have the King Xerxes ruling, but a King by name of Ahasuerus who is the brother of Xerxes in the story, but there is no historical evidence of his existence). Some of these changes were out of necessity to lengthen the tale, some were artistic changes in order to forward the story.

Esther is conflicted. She has come to love her husband, and fears that he will discover that she is a Jew and cast her off. She knows that he loves her too, but he is led by honesty and despises lies. When a declaration is made, by Haman in the name of the King, that would lead to the extermination of all Jews, Esther must act on faith and reveal herself as a Jew and plead for the lives of her people.

The plot runs smoothly throughout. It was truly an enjoyable story.

I received a copy of this book in order to write this review. No further compensation was received. Summary and cover image from Goodreads.

One Response to “A Reluctant Queen: The Love Story of Esther by Joan Wolf Review”