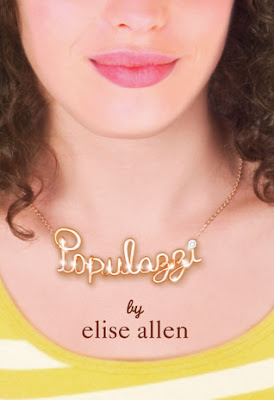 Populazzi by Elise Allen
Hardcover, 400 pages
Expected publication: August 1st 2011
by Harcourt Children’s Books
ISBN 0547481535
3.5 stars
Cara has never been one of those girls: confident, self-possessed, and always ready with the perfect thing to say. A girl at the very top of the popularity tower. One of the Populazzi.

What most of us wouldn’t give to have a chance to go back to High School and change some of the things we didn’t like, or even to pick a new crowd to hang out with? Unfortunately for the majority, the reputation we get early on sticks… and for Cara, an unfortunate day in elementary school marks her social status for life. The good news is that she meets her best friend Claudia, and the two become inseparable. That is, up until their junior year when Cara moves to a new school.

While Cara is thinking a fresh start, her best friend is thinking opportunity awaits for her BFF to climb the social ladder all the way to the top. Claudia is out to make Cara supreme Populazzi…and she is not about to give up with her plan until Cara sees it all the way through. Things aren’t looking too hot when upon arrival to school, Cara’s first two friends are part of the Happy Hopeless and Cubby Crew cliques. There’s Robert who knows his Star Wars backwards and forwards, even wearing a cape to school and Archer the theater geek who wants to get to know Cara via play ping pong. As the weeks go on Cara develops feelings for Archer. Could she have found a boy who respects her and makes her laugh or will she succumb to the pressure of Claudia’s plan to become penultimate popular?

You guessed it! She makes the same mistake many teens make in trying to figure out who they are. As Cara starts climbing her way to the top she discover there is power in popularity. She changes her self for others and as a result there are consequences.

Watching her slide into risky behaviors and become a chameleon based on which boy she was with was painful only because it is so common with the teenage crowd. Author Elise Allen uses humor to deal with bullying, bulimia and social pressure. Similar to the movie Mean Girls, Populazzi shows that so many of us think only of the immediate future instead of the long-term track our choices will take us down.

I loved loved the main male character Archer an the advice he gives to Cara about her parents, especially the step-father who “disowns ” her repeatedly. Archer is wise beyond his years and I wish we could have seen more of him. The characters were well fleshed out and multi-faceted, the writing very creative. I would, however, not recommend this book to younger teens as it has underage drug and repeated alcohol use as well as loads of detailed talk about sexuality.

Populazzi was a fun read with a good ending about being true to who you are. As well, it is an eye opener about what may be a reality in some popular crowds. Thanks so much to Harcourt Children’s books for the ARC and for choosing our site as a stop for the blog tour.

To learn more about the author visit EliseAllen.com which “is the personal and professional web presence of Elise Allen, writer of Young Adult and Childrens’ fiction, as well as television, features, and internet programming.”