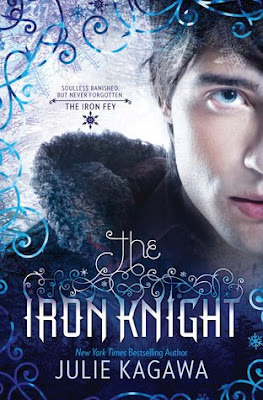 Once again Julie Kagawa absolutely blows me away with her masterful storytelling. She takes myth and fairytales of old and mixes in characters of her own creation then sets them in a world only she could build. Everything feels so real and vivid. In this final bookend to the Iron Fey series, Ash is out to keep his promise to be with Meghan forever. He must find his way from the Never Never to the River of Dreams to The End of The World and The Testing Grounds then face his demons and ghosts of the past. His quest begins with Puck and Grim and along the way several new characters are added in. Ones the reader will never guess!

It took me a while to get used to hearing the story from Ash’s perspective instead of through Meghan’s voice but I enjoyed seeing a whole new side to Ash. He must face the dark side of who he once was and his biggest fears that come with a soul. The Iron Knight explored the importance of keeping stories alive and atoning for past mistakes as well as the power of loyalty and love. Each character is forced to make some tough decisions.

I’m sad to see the ending of one of my favorite stories but am happy Julie has announced two new series. She never ceases to amaze me. Thanks so much to Net Galley and Harlequin Teen for a wonderful journey through the forest with the fey, red caps, the big bad wolf and even Baba Yaga. I can guarantee Ash, Puck and Meghan will long live on in readers’ imaginations!

4 Responses to “Book Review- The Iron Knight by Julie Kagawa”

Leave a Reply to TheGirlOnFire