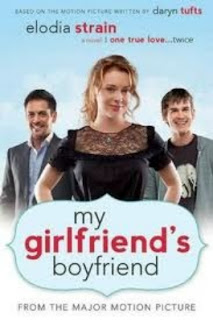 Unlucky-in-love Jesse finds herself thrown back into the dating game when she meets Ethan —a cute, struggling writer who seems perfect for her. Things get complicated fast, though, when only moments later she meets Troy—a confident, successful advertising exec who seems…just plain perfect. But everyone is keeping a secret, and Jesse soon learns that things aren’t always what they seem. My Girlfriend’s Boyfriend is a classic love story turned upside down, a romantic comedy that blends warm sincerity with fresh storytelling…and some big surprises.

If you’ve never read a book by Elodia Strain today is the day to go out and buy one. She is by far my favorite writer in the romantic comedy genre. I wasn’t quite sure what to expect from My Girlfriend’s Boyfriend because it was written based off of a movie that was released a year ago that I’ve never seen or heard of. But I picked it up knowing that I love Elodia’s sassy, hilarious writing. And then when curiosity got the best of me after I finished the book I had to rent the movie to compare notes.

I adore the changes Elodia made and the new characters she added to the written version. She made the story enough her own with a hilarious protagonist Jesse who tends to find herself in awkward situations. Recovering from a divorce, Jesse is not quite ready to throw herself back out there in the game of love-but with a little extra push from her coffee shop co-workers and her uncle she decides to take a few risks. Then within 24 hours, not one, but two eligible and swoon worthy men walk into her work and begin to vie for her attention.

Ethan, the starving writer and Troy the rich successful executive couldn’t be more different. Funny thing is that in the book I found myself rooting for one and in the movie the other…each have qualities that will attract both Jesse and readers. You’ll laugh out loud and be very surprised at the big twist in the end. I actually had to read the last chapter through twice just to make sure I’d read it right! I would highly recommend My Girlfriend’s Boyfriend as a squeaky clean and hilarious romance for all readers. It addresses honesty, trust, taking a chance on love and following your dreams. Well done once again Elodia!

About the Author: Originally from California, Elodia Strain has lived everywhere from Alaska to Washington to Pennsylvania, where My Girlfriend’s Boyfriend is set. She currently makes her home near Dallas, Texas, where she loves playing with her adorable nieces and nephews, swimming, and enjoying good Tex-Mex.

Elodia is also the author of The Icing on the Cake, for which she was named Best New Fiction Author by Cedar Fort, and Previously Engaged, which was a 2009 Whitney Award Finalist.

She can be found online at http://www.elodiastrain.com/.

Head on over to Goodreads between now and September 30th for your chance to win a copy of My Girlfriend’s Boyfriend from Cedar Fort publishing.