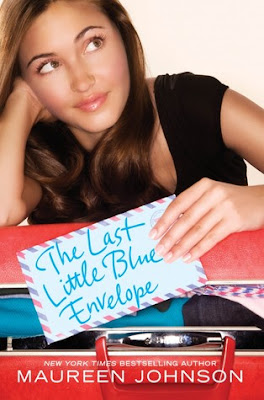 Ginny Blackstone thought that the biggest adventure of her life was behind her. She spent last summer traveling around Europe, following the tasks her aunt Peg laid out in a series of letters before she died. When someone stole Ginny’s backpack—and the last little blue envelope inside—she resigned herself to never knowing how it was supposed to end.

Months later, a mysterious boy contacts Ginny from London, saying he’s found her bag. Finally, Ginny can finish what she started. But instead of ending her journey, the last letter starts a new adventure—one filled with old friends, new loves, and once-in-a-lifetime experiences. Ginny finds she must hold on to her wits . . . and her heart. This time, there are no instructions.

A couple of weeks ago when author Maureen Johnson announced on twitter that her newest book in the Little Blue Envelope series was up on NetGalley I put in my request for the e-galley and found the first book 13LBE to start reading. 13 Little Blue Envelopes was this random collection of letters from Ginny’s dying aunt Peg that lead Ginny all across Europe in search of clues and tasks. I finished the book having enjoyed the ride but feeling there was so much left undone, random like a wild goose chase.

Book 2, The Last Little Blue Envelope completely stole my heart and tied things up in a beautiful package similar to a Christmas gift from Harrod’s. I loved the sense of purpose and growth book two brings. Maureen Johnson’s writing is brilliant and funny, witty and adventurous. The Last Litle Blue Envelope picks up where book one left off. The 13th letter that was stolen from Ginny on a beach in Greece has been found by a man in London named Oliver. Oliver contacts Ginny via email in America offering her the last letter, but for a steep price.

Oliver was a welcome addition to the cast; I absolutely loved him! He’s brooding and a loner, but deep down you have to know something serious is going on for him to act the way he does. By the end I found myself wishing we knew even more about him. But the New Year’s scene in Dublin and the stop at the train station are enough to keep me tied over until book three. Please Maureen tell us there is one!?

Keith is back as immature and quirky as ever, plus he has a new “friend” Elle. The four teens take on a quest spanning Paris to Ireland to find the last dying wish of Ginny’s aunt that is simply magical. You’ll feel you are traveling right along with them because of all the small intricate details Maureen paints in to the picture. Plus, in the process there are life lessons that make each character stretch beyond who they were when it all started. Ginny especially has become more of a woman than she was in the beginning. The Last Little Blue Envelope was a treat to read and I would recommend it to all readers as a clean travel adventure with coming of age lessons that are vital for teens. Well done Maureen! And thanks to NetGalley/ Harper Teen for making TLBE available to us online.

One Response to “The Last Little Blue Envelope”